Australia had a five wicket victory over England in their last T20I where the spinners shared five wickets among themselves.

Adam Zampa missed the last match of the ongoing Tri-series between Australia, England and New Zealand. Zampa displayed a decent performance in the first T20I against New Zealand, picking up 1 for 21.

Australia produced a five-wicket victory over England in their last T20I. The spinners shared five wickets between them. In a report published by cricket.com.au, Zampa said that he believes wrist spin can win matches.

“A lot of countries around the world are opting for two wrist-spinners, let alone no wrist-spinners. It’s just the grounds and the situations we’ve got ourselves in probably that make it a little bit different in Australia. I think wrist spin is definitely the way forward in particular and even two or three spinners in a team. We saw the other night that it was the two spinners that changed the game for us so I think definitely having a wrist-spinner that can spin it both ways is always good to have in your team,” he said.

Zampa, who missed the last match, believes his addition to the team will be a benefit as the next game will be played at MCG.

“I would like to think it’s a better team with me in it,” he said.

“The last couple of years I’ve hardly put a foot wrong in Twenty20 internationals. I was definitely disappointed not to play but the squad mentality thing is pretty important.

“Coming up to the MCG where I do play my Big Bash, hopefully I’ll come into consideration,” he concluded. 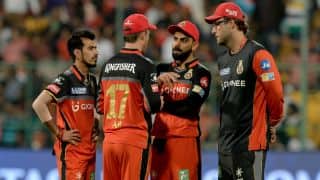