Ben Stokes, however, is set to miss the second Test at Lord's because of a clash with his Bristol court appearance on a charge of affray.

England could name an extended squad for their 1,000th Test when selection chief Ed Smith unveils on Thursday the group chosen for next next week’s series opener against India at Edgbaston. But while Smith has already shown himself to be unconventional by recalling Jos Buttler purely on the basis of the batsman’s form in the Indian Premier League for the preceding drawn Test series at home to Pakistan — Smith’s first as a selector — it would still be a surprise if leg-spinner Adil Rashid was included for the India opener.

The Yorkshireman, who unlike Buttler has opted out of red-ball domestic cricket to concentrate on the limited overs game ahead of next year’s World Cup in England, was in fine form during the recent 2-1 one-day international series win over India. In particular, the way Rashid starred in England’s series-clinching win at his Headingley home ground last week, where he bowled India captain and star batsman Virat Kohli with a classic leg-break sparked a debate about whether he would get the nod for Edgbaston.

But leaving aside the thorny question of what including Rashid would say to all those cricketers trying to gain an England Test place as a result via the traditional method of toiling in the County Championship, it is not as if England are devoid of spin options. Off-spinner Moeen Ali, who also bowled well during the one-dayers, returned to red-ball form with five for 107 for Worcestershire against Somerset in the latest round of Championship matches after a miserable Ashes tour of Australia. Left-armer Jack Leach started the season as England’s first-choice Test spinner but injury allowed Somerset team-mate Dom Bess, an off-spinner, to make his debut against Pakistan at Lord’s.

Yet Bess arguably impressed more as a batsman than a bowler and this week he was left out by Somerset in favour of Leach for the Worcestershire match. Meanwhile James Anderson and Stuart Broad are set to take the new ball once again. However, with five Tests in just six weeks, the depth of England’s pace bowling resources could be tested. Chris Woakes, fit after knee and thigh injuries, will hope for a Test recall at his Edgbaston home ground, while seam-bowling all-rounder Ben Stokes provides another option.

Stokes, however, is set to miss the second Test at Lord’s because of a clash with his Bristol court appearance on a charge of affray, which he denies. In an era where many touring teams complain about a lack of warm-up matches, India decided to reduce their schedule four-day game against Essex to three before play started at Chelmsford on Wednesday so they could spend more time at Edgbaston. “Instead of an extra day here, I think an extra day (of training) there would be more valuable,” explained Ravi Shastri, the India coach.”More familiarity with the venue and the conditions where you are playing the first Test,” the former all-rounder added. 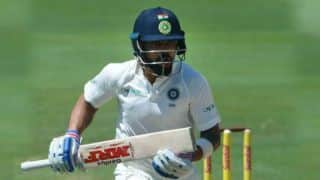