N Srinivasan is set to represent BCCI at the ICC meet in Barbados.

ICC Board meeting will be held in Barbodas from June 24-26. Srinivasan will also chair the meet as the head of world governing body of the game.

Verma said his representation at the ICC meet was against the spirit of the Supreme Court order which barred him from heading the BCCI.

“Srinivasan continues to have commercial interest in IPL since India Cements Ltd is deemed to be the owner of Chennai Super Kings (CSK). He continues to be disqualified despite transferring the franchise to a trust. Thus, the election of Srinivasan as president of TNCA is in contempt of the Supreme Court,” Verma said in the letter. READ: N Srinivasan re-elected as TNCA President

Verma has also forwarded a copy of the letter to the Supreme Court-appointed Justice R.M. Lodha Committee, who will decide on the quantum of punishment for the those indicted in the IPL spot-fixing scandal. 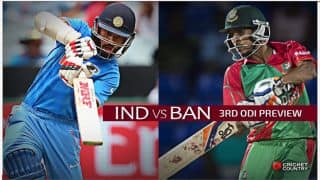