BCCI will not hold the AGM as scheduled on September 30.

Continuing his crusade against the alleged corruption in the BCCI due to president-in-exile N Srinivasan‘s presence, Aditya Verma threatened to move Supreme Court if the board’s Annual General Meeting fails to make its September deadline.

The BCCI members in an informal meeting in Chennai today decided to convene a Working Committee meet on September 26 and wait for the AGM till the SC-appointed Mukul Mudgal committee submits its final report in the first week of November.

The BCCI elections, which are scheduled to be held during the AGM, need to be conducted before September 30, according to the board’s constitution rules, and Verma, the secretary of the Cricket Association of Bihar (CAB) and the petitioner in the IPL corruption case, said that he was ready to move to Apex court for justice.

“I will moved to Supreme Court, if BCCI deferred or postponed their coming AGM at the outset, I would like to bring to your notice the complete chaos that is prevailing in Indian cricket because of the absence of an able leader,” Verma wrote in a media statement.

Though legal experts believe that key members in the BCCI executive committee seem to be misinterpreting the SC order and the Board’s Memorandum and rules and regulation in force since September 15, 2012 by trying to imply that Srinivasan’s presence in the AGM is necessary. Verma also believes that the board is acting on the whims and fancies of one person.

“Being run by proxy officials, who neither have the acumen nor the administrative quality to follow the right path at the time of need, BCCI has become an object of ridicule in the international arena. I have informations from reliable sources that some officials of BCCI in connivance with Srinivasan have conspired to defer the schedule AGM in order to provide gain to Srini whose role is IPL 6 scam is under investigation,” said Verma.

“Hon’ble Supreme Court directed Shivlal Yadav will be the Interim President with all the administrative powers of BCCI. He is free to hold the AGM. He can sign the accounts paper. There is no any legal hurdle and Yadav can discharge all his power till further orders,” he added.

Earlier, Verma had also requested relevant authorities, like the Inspector General of Registration, Tamil Nadu, to stop the BCCI from postponing its AGM but today’s meeting was a show of strength by the under-fire boss, as around 20 members attended the meet, which showed that Srinivasan has overwhelming majority among the 31 members.

If the report clears Srinivasan of any wrongdoing, the Tamil Nadu strongman is unlikely to face any election as the opposition faction led by former BCCI president Shashank Manohar has support of a mere four units at the moment. 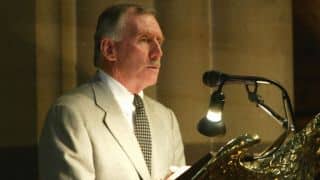