Aditya Verma alleged that the BCCI had wrongly granted associate membership to BCA and also provided it Rs 50 lakhs.

New Delhi: Cricket Association of Bihar (CAB) secretary Aditya Verma on Friday shot off a letter to Board of Control for Cricket in India (BCCI) Ombudsman Justice AP Shah, requesting him to take urgent action against the Indian cricket board for granting associate membership to rival faction Bihar Cricket Association (BCA). In its letter, the CAB secretary said “the Board is attempting to circumvent and recognise the Bihar Cricket Association as associate member, despite having taken a contrary stand in sworn affidavits before the Hon’ble Supreme Court”. READ: IPL 2013 spot-fixing: Aditya Verma asks BCCI to implement Lodha Panel recommendations

“It is most respectfully submitted that this is being done only to ensure Cricket Association of Bihar doesn’t get its due recognition as a full member. You are, therefore, requested to take urgent action against the Board to ensure that the stand taken before the Hon’ble Supreme Court be sustained, and also that the Cricket Association of Bihar not be prejudiced in the matters before the Hon’ble Supreme Court,” Verma added.

Verma alleged that the BCCI had wrongly granted associate membership to BCA and also provided it Rs 50 lakhs. He also said that BCA had split into two factions due to alleged infighting, one led by Lalu Prasad Yadav and the other by Ajay Narayan Sharma. “To the shock and surprise of the CAB, on 9th January 2016, Prof Ratnakar Shetty and KVP Rao visited Patna and met Abdul Bari Siddiqui, the President of one of the factions of the BCA and declared to the press that BCA was being recognised by the Board as an associate member and it will be responsible for organising associate tournaments,” Verma said. READ: Aditya Verma moves Supreme Court to get N Srinivasan suspended from TNCA

Verma claims that CAB enjoys the support of 38 district associations in Bihar and has made an application for full membership of the BCCI, which is pending before the Board. 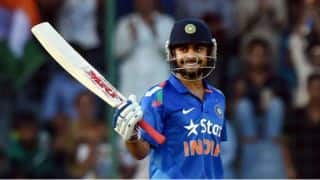