Afghanistan's first major achievement in a series against any Test playing nation.

Afghanistan beat Zimbabwe in back to back matches and by doing this they drew (2-2) in the One-Day International (ODI) series at Bulawayo. They have won series against a Test nation that also away from home. It has to be a significant achievement for Afghanistan cricket. Batting first Afghanistan made a competitive  259 in their 50 overs. In reply Zimbabwe were all out for 159 in 38 overs and lost the match by 100 runs.

Zimbabwe won the toss and as expected they decided to bowl first in the fourth and final One-Day International (ODI) against Afghanistan. After losing the opener Javed Ahmadi (7) cheaply, Afghanistan batted carefully. Most of their middle order batsmen got runs but no one played a big innings. For them Shafiqullah top scored with a quick-fire 56 and Samiullah Shenwari scored 40 and captain Mohammad Nabi played a handy inning of 37. For Zimbabwe youngstar Donald Tiripano took five for 63. He was well supported by Shingi Masakadza, who took two for 39. Afghanistan was all out for 259 in 49.1 overs.

In reply Zimbabwe were once 29 for six. Then debutant wicket-keeper batsman Richmond Mutumbami (64) rescued the innings with Timycen Maruma (29). They put up a partnership of 97 runs. Sharafuddin Ashraf broke the partnership for Afghanistan. He trapped Maruma in front of the wicket. In his next over Ashraf got the price wicket of Mutumbami, who was batting freely at that time. With that wicket the hopes Zimbabwe were also gone. The innings finally ended at 159 in 38 overs. 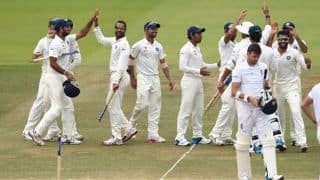