Afghanistan captain Asghar Stanikzai said his side will head into next year’s World Cup aiming to lift the trophy, after capping a remarkable recovery in qualifying by thrashing the West Indies in Sunday s final.

Both Afghanistan and West Indies had already made sure of their places in the 2019 World Cup by topping the 10-team qualifying tournament in Zimbabwe.

Mohammad Shahzad starred as the Afghans laid down a marker ahead of the tournament in England and Wales by romping to a seven-wicket win.

This victory will give us the required boost to work extremely hard over the next 14 months and like the other nine sides, will arrive in England and Wales firmly believing we can win the World Cup, said Stanikzai.

The celebrations continue in the Afghanistan changing rooms! #CWCQ pic.twitter.com/jI4rEd8cNY

Afghanistan had looked set to miss out on a second straight World Cup appearance after slumping to three straight defeats in the group stage of qualifying, but Sunday’s final win made it five straight victories as they qualified with help from results elsewhere.

This is nothing but a miracle that we have won this tournament, added Stanikzai, whose team will also play their maiden Test match against India in Bangalore in June.

This is by far Afghanistan’s greatest victory. Beating the mighty Windies in the final of a tournament which is no less than a mini-World Cup, is something like a dream come true for all of us.

The boys have shown what they are capable of. If we have come this far in 10 years, I leave it to you to decide where we can be in the next 10 years.

Leg-spin sensation Rashid Khan became the fastest bowler ever to reach 100 ODI wickets as the West Indies were bowled out for 204, before big-hitting opener Shahzad smashed 84 as Afghanistan knocked off the runs with 9.2 overs to spare.

I m proud of my boys. We came here to achieve a target, and various boys put their hands up, said West Indies skipper Jason Holder.

We had a quick turnaround between games, but I’m proud of them for sticking in. Obviously disappointed not to win this final but we had some great performances throughout. I want to thank my team for their support.

West Indies star Chris Gayle capped a poor personal tournament as he was dismissed for only 10 by 16-year-old leg-spinner Mujeeb Ur Rahman, who finished with 4-43.

Shahzad played some remarkable shots in his 93-ball innings, clubbing 11 fours and two sixes before holing out to the part-time spin of Gayle. 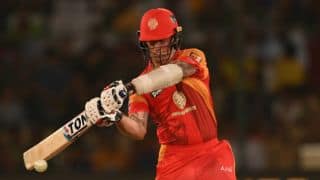