The Afghans will face cricket behemoths Australia and England at next year’s World cup.

Afghanistan captain Mohammad Nabi said his team are not afraid of Mitchell Johnson, the Australian speedstar. In an interview to Daily Telegraph.au Nabi was talking about his team’s chances in the upcoming world cup. Afghanistan’s top cricketers are currently in Perth, part of a tour of Australia and New Zealand the team is undertaking ahead of its maiden World Cup appearance next year. The Afghans will face cricket behemoths Australia and England at next year’s tournament, as well as World T20 champions Sri Lanka and co-hosts New Zealand.

But despite having to square off against the likes of Johnson, Afghanistan captain Mohammad Nabi insists his players have nothing to fear. “We already played against Mitchell Johnson,” Nabi told Fox Sports News (Johnson took two wickets as Australia beat Afghanistan by 66 runs during their first ever clash in 2012). “No one will be scared from Mitchell Johnson. Yes it’s a big challenge to play against number one ODI rankings team (Australia is actually ranked fourth now thanks to the fickle rankings system). We do our best at that time. We have still five months more to practice with that condition.”

Nabi embodies the spirit of Afghan cricket. Born in a Pakistani refugee camp, he grew up playing cricket with a tennis ball in the dust of Peshawar. Now, he is a national hero and a respected figure in the game, having played county cricket in England and obtained a first-class bowling average of 24.60. While he holds no fear of opponents, Nabi realises how important it is for Afghanistan just to have qualified for cricket’s major global tournament.

“Last 10 years we are nothing in cricket, and now we are in the World Cup. It’s a big achievement in the cricket life of Afghanistan. It’s a big responsibility on my back and on my shoulders. Inshallah [God willing] I will perform very well in the World Cup.” Nabi said. It’s been far from plain sailing for the Afghans since they qualified for the World Cup last October. Despite beating Bangladesh and Zimbabwe in one-day internationals, they suffered a loss to lowly Malaysia and failed to qualify for the main stage of the World T20 after losing to Nepal.

Most significantly, the man that guided them to World Cup qualification, coach Kabir Khan, resigned his post just a few weeks ago citing “personal issues and commitment with his family”. His replacement is Englishman Andy Moles, who was previously the team’s batting coach. Moles has plenty of coaching experience, having taken charge of New Zealand for a year back in 2008, but knows this is an entirely different type of challenge.

“The slogan back home is ‘unity through peace’, and cricket certainly is a big tool in getting the country together,” Moles said. “The passion for the game is enormous in Afghanistan. I think a lot of the youngsters are way out of the ghetto, as it were. So these players are idolised. The pride that they have and the fighting spirit that the Afghan nation have – they’ve been in wars and battles for many years [but] not many people knock ‘em over.

“I’m going to do my best to try and harness their natural aggressive instinct, and with a bit of discipline and natural cricket ability, we want to compete in every game.” We’ll find out how that fighting spirit fares against Johnson’s thunderbolts when the team’s clash at the WACA on March 4 next year. 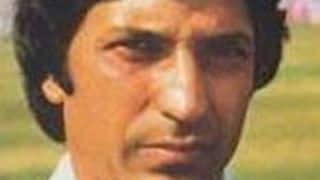