Afghanistan earned their second whitewash in a three-match series by mauling Ireland by 28 runs in the third T20I.

Afghanistan earned their second whitewash in a three-match series by mauling Ireland by 28 runs in the third T20I. Posting a mammoth 233 for 8 in 20 overs, Afghanistan were always on top but the Irishmen did not back down. William Porterfield’s side did go down with a fight but will have to regroup soon before the five-match ODI series, slated to begin from March 15 at Greater Noida. Opting to field, Ireland’s bowling continued to remain erratic. Mohammad Shahzad came out all guns blazing from the very first over of the game. Full Cricket Scorecard, Afghanistan vs Ireland, 3rd T20 at Greater Noida

Though, he lost his partner Najeeb Tarakai early but he continued to tear apart Ireland’s pacers, Barry McCarthy and Kevin O’Brien. Usman Ghani got his first chance in the series, and stitched a brief stand with Shahzad. O’Brien brought his side back by sending Ghani and Tarakai to the pavilion but George Dockrell, Andy McBrine, McCarthy and Stuart Thompson continued to leak runs. Irish bowlers learnt nothing from the past games as they kept bowling short and offered enough width on a small ground. Shahzad slammed fifty in no time amidst the fall of Asghar Stanikzai (12) and Najibullah Zadran.

Shahzad was eventually dismissed for a 43-ball 72, which included 6 fours and 5 sixes but the task of taking Afghanistan to a big score was taken over by Mohammad Nabi and Samiullah Shenwari (13). Nabi went all out with some huge straight sixes and scored 30-ball 89 (6 fours and 9 sixes).

This is Afghanistan’s highest score in T20Is and the eighth highest overall. O’Brien and Jacob Mulder shared 6 wickets among them but failed to curb the run-flow.

Ireland had lots riding on them to avoid a series whitewash. Losing the opener by 6 wickets and the second game by 17 runs (D/L method), Ireland wanted to finish off on a high. Their openers took on Shapoor Zadran and Nabi as Ireland had 50 on board within 4 overs. Paul Stirling was beaming in confidence as he found room and adjusted to the line and length accordingly. Stuart Thompson was giving him good support before Stirling fell for a 20-ball 49.

Porterfield and Thompson carried on in similar fashion. Nonetheless, the pressure of keeping up with the required run-rate kept Irish batsmen under check. Thompson departed for 43 and was followed by O’Brien (3). Porterfield found the going tough with wickets tumbling and fell for 16. However, the Irish captain became the first player to cross the 1,000-run mark in the shortest format from his side. Karim Janat and Amir Hamza were rotated well and they stuck to their line and lengths to slow things down for the chasing side. Afghanistan ride on Shahzad, Nabi’s blitz to post 233 for 8 in dead rubber

Gary Wilson did not lose hope and found support, for a brief period, from McBrine and Lorcan Tucker. Nonetheless, the writing was on the wall with the introduction of Rashid Khan. He had singlehandedly led to the downfall of Ireland in the previous tie and applied brakes on the scoring again. Wilson (59), Tucker and Greg Thompson went back to the hut courtesy Rashid’s spin. In the end, Afghanistan won the match by 28 runs and inflicted a series whitewash over their opponents.

The game saw 28 sixes to keep the spectators glued to the contest. This is Ireland’s fifth consecutive defeat against Afghanistan and with this victory the Asian side have extended their winning streak to 11 in T20Is.

The focus now shifts to the ODI series which will again be expected to be a full house with Afghan fans backing their troops.

Man of the Match: Mohammad Nabi

Man of the Series: Rashid Khan 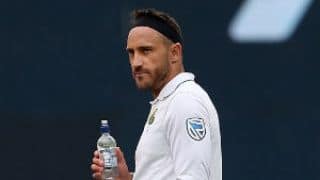