Afghanistan declare at 537/8 vs Ireland in Intercontinental Cup clash, Day 2

Afghanistan declare at 537/8 vs Ireland in Intercontinental Cup clash, Day 2

Afghanistan continued to pile up misery on Ireland whom they had recently crushed in limited-overs series, on the second day of their four-day ICC Intercontinental Cup match.

Afghanistan declared their innings with a massive 537 for 8 on the board as they played Ireland on Day Two of the four-day ICC Intercontinental Cup match. Afghanistan, who had scored 357 for 6 at the end of Day One, got to a formidable 470 for 8 at lunch at the Greater Noida Sports Complex Ground on Wednesday. They lost Asghar Stanikzai in the first session while Rashid Khan followed him soon. But Afsar Zazai continued making runs and scored the second century of the innings after his skipper Stanikzai. Zazai remained unbeaten at 103 at stumps with Dawlat Zadran 32 as Stanikzai decided to declare. LIVE CRICKET UPDATES: Afghanistan vs Ireland, ICC Intercontinental Cup, Day 2

Afghanistan captain Stanikzai was well set at 110 on Wednesday morning when play resumed. They brought up 400 for Afghanistan and batted with aggressive intent, with Stanikzai hitting a couple of sixes on Day Two before perishing off George Dockrell for 145. Stanikzai faced 209 balls and cracked 9 boundaries and 7 sixes and fell to the brilliance of the Ireland spinner, who turned the ball sharply when he saw the batsman coming down. Stanikzai was beaten by the turn and had no chance to make it in on time.

Rashid joined Zazai at the crease and tried carrying on with the momentum, ending the over with two boundaries. However, he too paid the price of being over-aggressive as he danced down the track to hit Dockrell over the ropes, but was not in control of the stroke. By coming down the wicket, Rashid failed to read it was an arm ball from the bowler, which went under his bat to crash into the wickets. Rashid could contribute only with 9 runs.

Perhaps, attack is the only way the Afghans play their cricket as Zazai, having lost two partners for being over-aggressive, decided to go the same route. However, Zazai had luck on his side as his aggression a six and a four in the next over did not cost him his wickets. Dawlat Zadran, played with patience and defended well. Zazai got to his half-century hitting a six and a couple of fours while Dawlat took singles apart from a boundary that took him off the mark.

Coming back from lunch, they paced up their innings and kept scoring quick runs. Dawlat kept hitting hard, ensuring boundaries in every over. Zazai who was unbeaten at 64 at lunch, went on to go past his career best 84 and register his first ever First-Class century. He got to the landmark facing 154 deliveries. Dawlat remained unbeaten at 32.

For Ireland, Dockrell was the only successful bowler in the first session on Day Two with the two wickets in form of Stanikzai and Rashid.

Afghanistan had started off well on Day one as the top-order performed well. While opener Shabir Noori departed for cheap, Mohammad Shahzad (85), Rahmat Shah (46), Nasir Jamal (73) made crucial contributions. Stanikzai performed exceptionally, getting his century which added a lot of pressure on the Ireland bowlers. 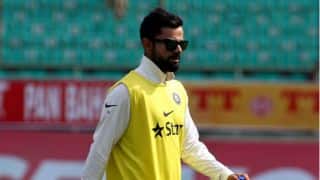