Senior Afghanistan players have accepted the leadership change ahead of the World Cup as they target a semi-final spot in the 50-over showpiece event, chief selector Dawlat Khan Ahmadzai said Tuesday.

Star players Rashid Khan, who was named Twenty20 captain, and Mohammad Nabi soon took to social media to criticise the move that comes just ahead of the World Cup starting May 30.

But Ahmadzai insisted the team stands united after having understood the need for the captaincy overhaul.

“The team members, including Rashid and Nabi, are now happy for Gulbadin,” Ahmadzai told reporters in New Delhi.

“He is not a new man. He has been playing for 17 years and has captaincy experience at the first-class and U-19 level.

“Gulbadin has said he’ll make use of Asghar’s experience (at the World Cup). They are a united front now. Changes do happen, like Sri Lanka did with their captaincy,” the former fast bowler added.

The 28-year-old Naib, a medium-pace bowler who bats in the middle order, has played 52 ODIs and 38 T20 internationals since making his debut in 2011 for the war-torn nation.

Since beating the odds to compete at the 2010 World Twenty20 in England, Afghanistan have qualified for all major international tournaments and recorded their first Test victory against Ireland last month.

The minnows are perceived as a dangerous team, having beaten former champions Sri Lanka in the Asia Cup last year as well as forcing a tie with giants India.

Ahmadzai believes the young cricket nation, which played their first 50-over World Cup in Australia four years ago, can make the last four in the 10-team event.

“There was no Rashid or Mujeeb (ur Rahman) in 2015 so this time we are aiming for a semi-final berth. With the team composition we have, we can definitely surprise a few teams,” said Ahmadzai.

“We have identified teams we can beat but obviously I can’t tell you which teams.”

Fit-again Hamid Hassan has returned to bolster the team’s pace attack and Ahmadzai said the team would benefit from the veteran’s presence.

“Hamid Hasan is back into the fast bowling attack and that is a big boost. He has been a great fast bowler for Afghanistan and will lead the pace attack alongside Dawlat Zadran,” said Ahmadzai. 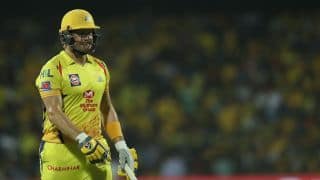