The three matches will be played on March 6, 8th and 10th at the Greater Noida Ground in India.

Afghanistan have recalled left-arm pacer Shapoor Zadran for their three-match T20I series against Ireland in March this year. Zadran last played an international match in Marchs 2019 while his last T20I was in June 2018.

19-year-old allrounder Azmatullah Omarzai, regarded as a bright prospect, has also bee included in the 15-man squad to be led by Asghar Afghan. Omarzai averages 49.66 with the bat and 20.43 with the ball in first-class cricket

Opening batsman Usma Ghani has also makes his return having not been included for the West Indies T20Is in October 2019. Spinner Qais Ahmad, who has played in Big Bash League and Caribbean Premier League, has also been included.

“We have selected the current best T20 players and hopefully will do better against Ireland,” Afghanistan chief selector Andy Moles said on Thursday.

The three matches will be played on March 6, 8th and 10th at the Greater Noida Ground in India.

The last time these two teams squared off in T20Is, Afghanistan clean swept Ireland 3-0 in Dehradun. 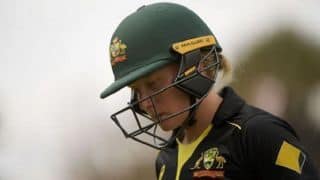