"Relations of India and Afghanistan date back to many, many decades; and India Afghanistan are two inseparable brothers

India is “completely committed to strengthening and rebuilding Afghanistan including their sports,” said Minister of Youth Affairs and Sports Rajyavardhan Rathore on the sidelines of the ongoing first-ever test match between the two countries in Bengaluru’s M. Chinnaswamy Stadium.

Both, Rathore and Afghanistan’s Chief Executive left Chinnaswamy stadium after witnessing part of Test match between the two countries. The minister said that when it comes to inter-country relations, they are like “inseparable brothers”.

Speaking to ANI he said, “Relations of India and Afghanistan date back to many, many decades; and India Afghanistan are two inseparable brothers, we are completely committed to strengthening and rebuilding Afghanistan including their sports.” He congratulated Afghanistan on becoming a full Test team and further wished to see them perform in several other sports.

“We have seen them in Indian Premier League (IPL) and congratulations to Afghanistan for becoming a full Test team now. We would like to see them more in other sports as well, wrestling leagues, kabaddi leagues and many other Olympic sports,” he added.

Further, he added that Afghanistan’s potential will start blooming once peace in the country starts to descend.
Meanwhile, Chief Executive of Afghanistan, Abdullah Abdullah while speaking to ANI appreciated Board of Control for Cricket in India (BCCI) for their help to the Afghanistan team, as they had provided the team with a cricket ground in Uttar Pradesh’s Noida city for practice.

“BCCI has helped our team throughout, but they (Afghanistan) have shown big talent, spirit, and energy and they have come thus far, we are very hopeful towards their future,” Abdullah said. After watching part of the test match, he hailed it as a new dimension in the inter-country relations.

“It is a historical event in our sports history and also in our relations between both countries. As far as sport is concerned, the Afghan players have come a long way in a short period of time,” he said. He praised the Afghanistan team for making cricket a well-known sport in the country in a very short time; and especially spinner Rashid Khan, who had a successful stint in the 11th edition in the Indian Premier League.

The 19-year old finished with a total of 21 wickets for runner-ups, Sunrisers Hyderabad
“Rashid Khan is a well-known name in India, so are one or two more of these. Cricket was not a known sport in Afghanistan a few years back, but today because of players like them it’s now very popular. Our people feel proud of them,” he said.

On a related note, India won the toss opted to bat first in the historic one-off Test match against Afghanistan at the M. Chinnaswamy Stadium in Bengaluru on Thursday. India has headed into the match without their regular captain Virat Kohli, who is currently undergoing rehabilitation for a neck injury sustained during his campaign with the Rajasthan Royals at the 11th edition of the Indian Premier League (IPL).

For Afghanistan, Afsar Zazai will keep wicket while two frontline spinners– Rashid Khan and Mujeeb Ur Rahman— have also been named in the Playing XI. Afghanistan, who has fast established themselves as a force to reckon with in the shorter formats, will become the 12th side to feature in men’s Test cricket after Ireland debuted against Pakistan last month. In day one of the test match, India is on the crease, having scored 280 runs for the loss of a single wicket. 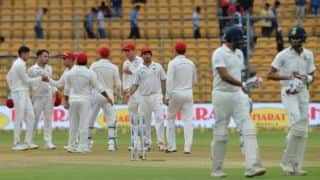 In Pictures: India vs Afghanistan, Day 1