Off-spinner Mujeeb Ur Rahman struck with the first ball of the innings to trap Tamim Iqbal lbw for nought.

Teen sensation Rashid Khan  led an inspired spin attack to help Afghanistan trounce Bangladesh by 45 runs in the first Twenty20 international on Sunday. Khan claimed three wickets with his wily leg-spin to help bowl out Bangladesh for 122 as hosts Afghanistan took a 1-0 lead in the three-match series in the northern Indian city of Dehradun. Off-spinner Mujeeb Ur Rahman struck with the first ball of the innings to trap Tamim Iqbal lbw for nought.

Fellow spinner Mohammad Nabi soon joined in to claim the two crucial wickets of Liton Das, for 30, and Shakib Al Hasan, for 15, as Bangladesh were reduced to 3-64. The 19-year-old Khan then broke Bangladesh’s back with two successive strikes in his very first over to derail the chase.

Samiullah Shenwari, who hit an 18-ball 36, and Shafiqullah Shafiq, who made 24 off 8 balls, provided a late blitz to take the attack to the opposition bowlers. Paceman Abul Hasan and off-spinner Mahmudullah took two wickets each. The Asghar Stanikzai-led Afghanistan, who are tuning up for their debut Test against India starting June 14, next take on the visitors on Tuesday at the same venue. 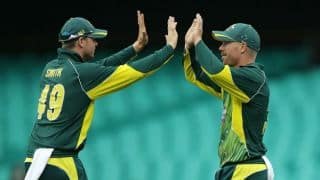