Zimbabwe got off to a flyer start as they scored 52 in the Powerplay, however they could only manage a total of 120.

Zimbabwe got off to a flyer start as they scored 52 in the Powerplay, however they could only manage a total of 120. Solomon Mire was playing a blinder before Aftab Alam got rid of him in the last over of Powerplay. He scored 34 off 21 balls with 5 fours and 2 sixes. Rashid Khan was the star bowler of Afghanistan who finished 3 for 19 in his four overs. Afghanistan chased down the score under 15 overs to take a lead of 1-0 in two match T20I series.

Mohammad Shahzad was back in the side after serving his one year suspension period. He was suspended for doping violation as he played his last ODI in March last year.

The wicket of Mire opened the floodgates as Zimbabwe who were 52 for 1 at the end of Powerplay and were reduced to 85 for 8 under 17 overs. Rashid was the highest wicket taker with three wickets. Sharafuddin Ashraf made a good comeback after being smashed for 23 runs in one over in the Powerplay. He took 2 for 31 in his four overs taking the important wickets of Sikandar Raza and Graeme Cremer.

The Zimbabwe bowlers did a good job taking wickets at regular intervals and ensuring that Afghanistan don’t build up a partnership. This made it tough for the Afghans as they lost 5 wickets in the process. Mohammad Nabi played a responsible knock of 40 with a strike rate of 148 to win it for Afghanistan. 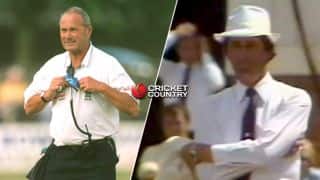