Ireland bolstered by the return of their senior men will now have to bat sensibly to chase down the score and notch up their first victory of the tour (they were whitewashed 0-3 in the T20Is).

Afghanistan and Ireland locked horns in the first of the five-match ODI series, being played at Greater NOIDA. Opting to bat, Afghanistan managed to post a healthy score of 292 for 7 in 50 overs in what promised to be an evenly matched contest. Ireland bolstered by the return of their senior men will now have to bat sensibly to chase down the score and notch up their first victory of the tour (they were whitewashed 0-3 in the T20Is). On the other hand, Afghanistan were rely on spin trio Rashid Khan, Amir Hamza and Mohammad Nabi to go one-up in the series. FULL CRICKET SCORECARD: Afghanistan vs Ireland, 1st ODI at Greater NOIDA

Batting first, the script seemed to remain the same for both sides. Mohammad Shahzad and Noor Ali Zadran set off to their usual start: as Shahzad launched his usual brutal onslaught, Noor Ali adopted a more sedate role, playing second fiddle. Ireland made a few changes in their bowling line-up after their erratic show in the T20Is, but were unable to contain runs. Tim Murtagh and George Dockrell failed to create an impact with the new ball. William Porterfield rotated his bowlers as Shahzad settling in. Jacob Mulder and Peter Chase came on, and Shahzad was run out against the run of play, for a 41-ball 43. He struck a six and 7 fours during his stay.

Rahmat Shah, who was not a part of the T20I squad, made the most of his early arrival at the crease. He, along with Noor Ali, saw through the middle overs, keeping wickets intact as well rotating the strike and getting the odd boundary. They added 83 before Noor Ali was caught at short mid-wicket for 51 off Dockrell.

The run rate dropped further after skipper Asghar Stanikzai was caught behind off Murtagh for 10. Rahmat held his end but with only 34 runs coming from in a 9-over phase, he hit straight to long on off Kevin O Brien.

Hashmatullah Shahidi and Samiullah Shenwari triggered a late onslaught after Rahmat perished. The pair got the occasional boundaries off Kevin O Brien and Chase, but Dockrell was hammered all round. Shahidi fell for a run-a-ball 32, which brought in Nabi, the favourite of the crowd.

Nabi carried on from where he had finished after his 30-ball 89 in the last T20I. He lost Shenwari (30 off 22) as O Brien struck again, but blasted Chase and Murtagh to ensure the run rate never dropped. Nabi s 19-ball 34 not out helped Afghanistan post a big score.

With 3 for 47 from his 10 overs, O Brien was the pick of the pick of the bowlers. Paul Stirling did a good job, conceding 20 from his 5 overs. One wonders why he did not get a longer spell.

Things look difficult for Ireland, but it is certainly achievable. Their batting order is full of men who can play long innings and explode at will, and there is no reason why they cannot put the pressure back on Afghanistan if they perform to their full potential. 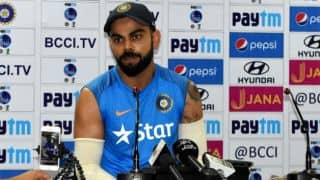 India vs Australia: Virat Kohli has no regrets over war of words with Steven Smith