Afghanistan and Ireland will face off in the series opener with the first T20 to be held at Greater Noida.

We are more than happy to host Afghanistan, who have shifted their base to Greater Noida from Sharjah, their earlier home ground. Uttar Pradesh chief minister Akhilesh Yadav was very keen on offering the stadium to Afghanistan. He had directed us to make modifications in the stadium as suggested by the cricket experts to make it an international ground. We prepared the stadium and the pitch in a shot span of time because the UP government wanted to grab this opportunity, Hindustan Times quoted Rama Raman, chairman of the Greater Noida authority, after BCCI, Afghanistan Cricket Board (ACB) and Greater Noida Industrial Development Authority signed a MoU in December 2015. Full Cricket Scorecard, Afghanistan vs Ireland, 1st T20 at Greater Noida

The stage is set for Afghanistan to play their first series at Greater Noida, their home away from home. Afghanistan’s first series here is against rivals Ireland. It is a riveting prospect for the subcontinental side to play hosts in a cricket-crazy nation such as India. Both the countries have immense zeal for the game, leading to large footfalls in the stadium.

The forthcoming series comprises of three T20Is followed by a five-match ODI series. The two sides have lots going for them lately.

Afghanistan are gaining strides slowly and steadily in international arena, and their counterpart may have hit a rough patch by some margin in recent years but still remain a promising outfit. Both the sides are pressing hard at ICC’s door to earn the coveted Test status. It should likely be granted by 2019, and they will like to show who is more superior among them in this series.

This is the first instance of Ireland and Afghanistan clashing in a bilateral T20 series. The head-to-head record is in favour of the Asian side, winning 4 out of 7 matches. The last time these two locked horns in this format was in the final of inaugural edition of Desert T20 2017 in UAE. It was a forgettable affair for the Irishmen, losing both encounters.

Momentum is the biggest craving for sides in T20s, and the above numbers put Afghanistan ahead. The pitch remains a mystery, but should behave like a typical Indian surface and assist spinners later on. This will test Ireland to some extent. Nonetheless, the beauty of this format is its uncertainty. Even a brief period of play going in any side’s favour seals the deal in the shortest format. Being aware of this, Afghanistan will be on their toes to grab a lead in the series opener on March 8.

To match the big boys, Ireland and Afghanistan need to keep pressing hard whenever they take on the field. They have demanded a promotion to play in whites. For that to happen, they will come hard at each other. I, Aditya Sahay, will be on the field expecting the likes of Mohammad Shahzad, Rashid Khan, Mohammad Nabi to fight hard against the likes of Paul Stirling, Kevin O’ Brien and Barry McCarthy, thereby lighting up the environment. 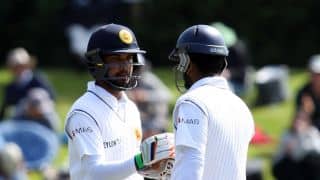