Afghanistan host Ireland in a nine-match series starting on Thursday.

Eighth-ranked Afghanistan face familiar opponents Ireland, ranked 17th, in the first of three T20Is in their adopted home of Dehradun on Thursday seeking to build on an unbeaten record in the town situated in the foothills of the Himalayas.

The last time Afghanistan played in Dehradun they swept Bangladesh 3-0 in an exciting series that was well received by local fans. Afghanistan and Ireland last met in August 2018 when Asghar Afghan’s team won 2-0, and now, back in the familiar settings of Dehradun, they seek to start a long ‘home’ series with Ireland on a strong note.

The Rajiv Gandhi International Stadium will see the teams play three T20Is, five ODIs and one Test in February-March. Afghanistan, who are 10-10 in ODIs and 9-3 in T20Is against Ireland, will hope to dominate the limited-overs contests before the Test match which is the second for both teams.

Ireland, coming off a 2-1 record in a T20I quadrangular last weekend, have a team comprised of experience and youth but will find the conditions the challenge, especially given how well Afghanistan’s spinners fared against Bangladesh in Dehradun.

Rain threatens to hit the match, which would be a dampener for everyone involved.

What: Afghanistan vs Ireland, 1st T20I

With Mohammad Shahzad dropped, Shafiqullah Shafiq will keep wickets and Usman Ghani will likely open. Seeking to trouble Ireland with spin, Afghanistan could hand a debut to Zakir Khan, the 17-year-old left-arm spinner.

Ireland are led by Paul Stirling with Gary Wilson sidelined. Stuart Poynter, whose last-ball six on Sunday sealed a one-wicket win over Netherlands, will keep wicket. Kevin O’Brien’s strong form as opener means he will keep that role alongside Stirling.

The Rajiv Gandhi International Stadium has hosted three T20Is, each featuring Afghanistan, in 2018. In those, 150 was crossed just once. Spin and pace both accounted for wickets there, with Rashid claiming eight. Scattered showers are forecast in Dehradun with a high of 20 degrees.

Rashid Khan has 62 wickets in T20Is and Mohammad Nabi 67.

“There s a good feeling amongst the squad at present – Stirlo has been excellent so far, leading from the front with the bat and demanding high standards in everything we do, and it has been great having the newer guys around.” – Andy Balbirnie 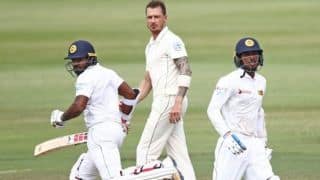