22 sixes, 19 fours, a 42-ball hundred and plenty of records under threat. Afghanistan batsmen put on an absolute show and scored in the second Twenty20 international against Ireland in Dehradun on Saturday. (ALSO READ: Hazratullah Zazai’s 162* helps Afghanistan to crushing 84-run win)

Asghar Afghan won the toss, elected to bat and then like many others enjoyed a spectacle unfold before his eyes at the Rajiv Gandhi International Cricket Stadium as Hazratullah Zazai (162 not out off 62 balls) and Usman Ghani tonked the ball and zoomed past many records and threatened to break a few more. (ALSO READ: Today was my day: Hazratullah Zazai after record 162*)

The opening duo Zazai and Ghani created a T20I record for the highest partnership for any wicket (236) as they went past Australia duo Aaron Finch and D’Arcy Short’s previous record of 223. Afghanistan, meanwhile, also surpassed Australia (263) to become the team with most number of runs (276) in a T20I innings.

Afghanistan also set a record for most number of sixes (22) in a T20I innings, going past West Indies’ 21. Zazai also broke Finch’s record of most sixes in an innings as he hit 16 off Afghanistan’s 22 sixes tonight. (ALSO READ: Afghanistan’s new superstar: The record-breaking Hazratullah Zazai)

While Aaron Finch’s record for most runs (172) for a batsman in T20I innings remained safe, the left-hander went past Finch’s second-highest T20I score of 156, Glenn Maxwell’s 145 and Evin Lewis’ 125 not out to jump to the second spot in the list of batsmen with most runs in a T20I innings.

While Ghani missed out on a hundred, he, too his credit, hit 73 off 48 balls with the help of 7 fours and 3 sixes. Zazai, meanwhile, was in some other league, as he simply dominated the Ireland bowling attack, scoring at will.

Most runs in a T20I innings for a batsman:

Most runs for a team in a T20I innings:

Highest partnerships in a T20 innings:

Most sixes for a team in a T20 innings:

Most sixes for a batsman in a T20I innings: 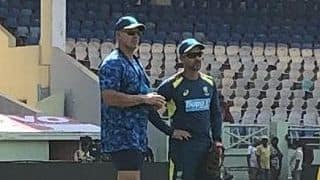