After suffering an initial collapse, Afghan and Zadran showed a lot of character to pull off a rescue effort with a 117-run partnership.

Dehradun: Afghanistan managed to bounce back from an initial collapse thanks to an unbeaten century from Najibullah Zadran well supported by captain Asghar Afghan as they have set Ireland a 257-run target in the third one-day international at Dehradun on Tuesday.

Opting to bat, the Irish, who were never a pain in the neck so far for their much fancied opposition, managed to lay into the Afghan top-order. Afghanistan lost Mohammad Shahzad for five after he was trapped lbw by Tim Murtagh. Rahmat Shah followed his opening partner three overs later after he was dismissed by Andy McBrine.

The dangerous Hazratullah Zazai started off in an explosive fashion, but he too was dismissed unluckily via a run-out after adding 34 off 33 which included three boundaries and a couple of hits over the fence.

Afghanistan found themselves in slight trouble at 74/5 in 19 overs. It was then that Afghan and Zadran showed a lot of character to pull off a rescue effort with a 117-run partnership. Afghan smacked four boundaries and three sixes before the sixth-wicket partnership was brought to an end by Boyd Rankin in the 44th over.

Zadran upped the ante after the departure of his skipper and got to his hundred his maiden in ODIs in the final over amidst a breathtaking assault on the death bowlers. Zadran was unbeaten with 104 off 98 balls his innings laced with five boundaries and as many sixes. Afghanistan lead the five-match series 1-0. The second ODI ended up in a quintessential damp squib. 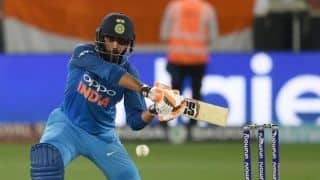