Ireland pacer Boyd Rankin has said that bowling well against Afghanistan will put his team in a better spot to win the one-off Test.

Ireland pacer Boyd Rankin has said that bowling well against Afghanistan will put his team in a better spot to win the one-off Test that gets underway from Friday in Dehradun. (READ: Afghanistan and Ireland chase historic win)

Both the teams will be playing their second Test after having made their debuts last year Afghanistan faced India while Ireland made their bow against Pakistan. (READ: Trophy unveiled for Afghanistan vs Ireland Test)

Having won the preceding limited-overs series, the Asghar Afghan-led Afghanistan will have the momentum on their side but Rankin feels the pressure and demands of the format will be tough work for everyone involved.

“It s been a long tour so far and it s been pretty hectic since arriving in India. I ve been involved in all the games, but the body feels pretty good at the moment. Saying that, the Test will be tough work for everyone, especially not playing any longer format cricket going into the match,” told newsletter.co.uk.

Ireland suffered a 0-3 clean sweep in the T20I series and then lost a five-match ODI series 1-3 that followed.

The 34-year-old Rankin, however, praised Irish bowlers saying allowing Afghanistan to revive their innings despite putting them in difficult situations cost them the series.

“I feel the bowlers did a pretty good job during the one-day series. Maybe we could have capitalised on good starts with the ball, but that s one day cricket – there is time to rebuild the innings and they were allowed to play well at times,” he said.

He added, “It will be another key battle in the Test match – our bowlers versus their batters – and if we bowl well it will give us a great chance to win the Test. I don t really expect too much difference with the red ball opposed to the white. It might swing early, but the ball will get soft quickly. So it will be hard for the seamers as Test progresses, but we are hoping there might be some reverse swing later in the innings with the wickets being pretty abrasive.”

As an experience, it s going to be hard to beat the feeling around Ireland s first Test last year, but it s always very special to play a Test match for your country and it will always have a buzz about it. Once we take the field it will be down to business of trying to win a game of cricket. 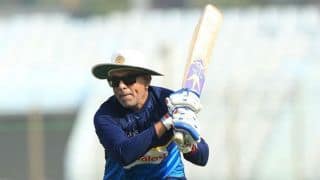