Afghanistan are unbeaten against Ireland in their last four meetings whereas the Asian side have also won their last 10 T20Is consecutively.

One has to feel for Ireland. They failed to capitalise on the half chances in the first T20I against Afghanistan. However, William Porterfield’s side was on course of leveling the series in the second game but rain had other things in mind. It not only curtailed the overs during Ireland’s chase, but also spoiled their momentum. At first, it looked like rain was going to be a blessing in disguise for the Irishmen. At the time of rain delay, Ireland required 120 off 83 balls and were 11 runs ahead in D/L method. No further game would have meant a victory for their camp. To their dismay, play resumed after nearly an hour’s gap which not only raised hopes in Afghanistan‘s dugout, but also led to Ireland’s collapse. The delay hurt their momentum and triggered a fall in concentration. Full Cricket Scorecard, Afghanistan vs Ireland, 3rd T20 at Greater Noida

As a result, the series is now done and dusted. Afghanistan defended a reduced target of 111 in 11 overs by 17 runs to take an unassailable 2-0 lead. Rashid Khan broke the backbone of Ireland’s batting order by taking the best T20 figures by an Associate nation player. He struck on his 3rd, 5th, 6th, 10th and 11th ball to end with 2-1-3-5. What lies ahead for both sides? Well, quite a few agendas.

Asghar Stanikzai’s side has been on a roll in T20Is. They have not only remained unbeaten since the last 10 games (most by any side) but also got the better of Ireland in their last four meetings. Afghanistan will like to whitewash the series and keep the momentum in their grasp before the five-match ODI series. On the other hand, Ireland will be keen to earn a consolation win and make some inroads into the opposition camp. They have been a bit unlucky and will like to be under control in their last attempt in the series.

Difference in both sides?

Clearly, Afghanistan were the favourites and have justified their tag. Ireland have fallen due to their inability to accelerate in the middle overs (during the 1st T2oI) and leaking too many runs in the death overs overall. Afghanistan’s spinners, Rashid and Amir Hamza, have held Ireland’s big guns from unleashing their attacking mode as well. Porterfield’s camp will have to spring up a much better performance with the ball and restrict Afghanistan from scoring bonus runs in the final overs.

On the other hand, Ireland need to have more contributions from their middle and lower order. In the first game, Porterfield-Stuart Thompson were on fire but Afghanistan pulled things back in the end. Similarly, Porterfield had Paul Stirling to partner him in the chase during the penultimate tie. Nonetheless, once the duo departed, no one could handle the pressure in the middle. Contrary to this, the Asian side has given a decent run to their batters at the crease. This only makes a stronger case for them in the dead rubber to be played on Sunday.

Hopefully, Ireland will have something to cherish about in the last clash. They should not get bogged down as the ODIs are lined up ahead. It will be equally challenging and they have the last chance to redeem themselves in this series and move ahead with some pride.

Rain or no rain, expect another lively crowd at Noida backing the Afghanistan team at their adopted home ground on Sunday. Moreover, the likes of Najeeb Tarakai, Mohammad Shahzad, Mohammad Nabi, Kevin O’Brien, Stuart Thompson and Paul Stirling will like to sign off the T2oI series in an emphatic fashion. 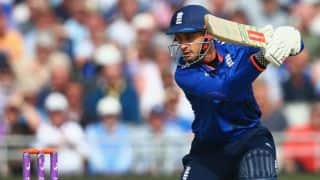