Afghanistan make their Asia Cup debut in the third match of the tournament.

(Afghanistan make their Asia Cup debut in the third match of the tournament as they take on Pakistan. It will be a huge challenge for the Mohammad Nabi-led side against Pakistan, who will be aiming to make amends after loss in the first match. Catch live cricket scores of the match in our live blog below.)

Perhaps one player — Umar Akmal — was the only difference between the two sides. Pakistan started off on a scratchy note and it got worse for them with the middle-order collapse. But Umar Akmal’s heroics not only bailed them out of trouble but also helped them put up a strong total, which proved too much for them. Pakistan win with a bonus point. Read our match report here.

Pakistan recovered well from a dangerous position to post a strong total against Afghanistan. Read our innings report here.

Toss: Afghanistan have won the toss and elected to bowl.   Pakistan have made one change in their team, Anwar Ali comes in for Bilawal Bhatti. Misbah says he is happy batting first.

Hello and welcome to the live updates of the third match of the Asia Cup 2014 between Afghanistan and Pakistan at Khan Shaheb Osman Ali Stadium in Fatullah.   This is Devarchit Varma and I will be bringing you the updates of this game. Read preview of the match here.   It will be a huge test for Afghanistan when they make their Asia Cup debut by taking on defending champions Pakistan.  Mohammad Nabi‘s Afghanistan came in for the Asia Cup after their qualification for the 50-over ICC World Cup 2015 scheduled next year. 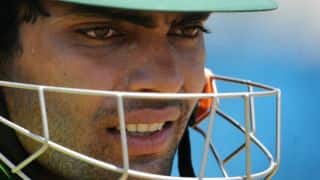