The live cricket streaming of Afghanistan vs West Indies 2017, 1st T20I at St. Kitts, will be available in India on Sony LIV.

Having coming off an impressive performance against Ireland in the One-Day International (ODI) series at Greater Noida in India, visitors Afghanistan look to make a name for themselves, when they take on hosts West Indies, in the first of the three-match Twenty20 International (T20I) series at the Warner Park, in Basseterre, St Kitts on Friday. The live cricket streaming of the match will be available in India on Sony LIV, along with the live telecast on Ten 3. In Afghanistan, the match will be telecasted on Afghan TV, while in West Indies. West Indies, having not playing the ICC Champions Trophy 2017, too would look to make a name for themselves. FULL CRICKET SCORECARD: Afghanistan vs West Indies 2017, 1st T20I at St. Kitts

In this period, Afghanistan witnessed the rise of excellent game-changing players in their ranks; players who can bamboozle the opposition leg-spinner Rashid Khan being the dynamic example followed by the all-rounder Mohammad Nabi. Both Rashid and Nabi rose to new heights earning a well-deserved chance in the Indian Premier League (IPL) 2017. The only thing that went against the rising Afghans was the suspension of Mohammad Shehzad, as the wicketkeeper-batsman has been suspended from all cricket following a positive test for banned substance earlier this year. But despite this setback, Afghanistan cricket has not looked back, continuing its stride forward.

If we look at West Indies record since their glory last year, they have won just two games out of nine internationals. Inconsistency, the tussle between the players and board has cost the Caribbean side big time giving away the glory in big chunks. But in this series against Afghanistan, The Brathwaite-led side will be optimistic of setting things right. A three-game series can serve as the right chance to regain some winning momentum and strengthen their team s morale. 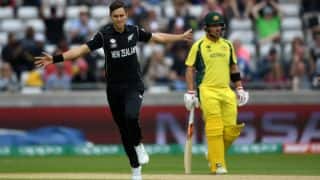