Afghanistan will take on Zimbabwe in the ultimate encounter of the five-match One-Day International (ODI) series at the Sharjah on Wednesday.

Afghanistan will cross swords with Zimbabwe in the final clash of the five-match series at Sharjah on Wednesday with the series being equally levelled between the two by 2-2. The winner of this battle will walk away with the series title and glory. Zimbabwe have returned from the dead after losing the opening games but made an impressive comeback in the third and the fourth game. They kept themselves alive by winning the fourth game by 65 runs, and now have an equal chance of winning the series. They gained momentum at the right time, and the onus is now on Afghanistan after losing their way completely following a terrific start, thereby squandering the initial advantage completely. FULL SCORECARD: Afghanistan vs Zimbabwe 2015-16, 5th ODI at Sharjah

Zimbabwe have achieved their primary goal of ensuring the final game is a decider. They played with tremendous confidence in the fourth ODI, when their top-order put themselves together and pulled off a spectacular show. The top-order got off to a flying start; they lost the way somewhere in the middle overs, but somehow managed to put a modest 226 on the board. Both openers Peter Moor and Chamu Chibhabha scored half-centuries to ensure their team was on the track from the start. The in-form Hamilton Masakadza continued with the good work but did not manage to convert the good start into a big score. Zimbabwe collapsed after Masakadza fell for a gritty 26. Chamu Chibhabha’s 4-25 helps Zimbabwe level series against Afghanistan in 4th ODI at Sharjah

Afghanistan bowlers were tidy, but not great. Dawlat Zadran and Rashid Khan chipped three wickets each, while Amir Hamza and Mirwais Ashraf accounted for four between them. Chasing 227 against a good bowling attack like Zimbabwe was never an easy task. Zimbabwe’s bowlers certainly did a good job with ball in restricting the hosts to a mere score of 161. Afghanistan had a dreadful day with the bat as they failed to even put up a fight. Zimbabwe drew early blood in the form of Noor Ali Zadran, and made the utmost use of their start by chipping wickets at regular intervals. Chibhabha was outstanding with the ball as he claimed four wickets, and was equally supported by other bowlers. He went on to become the sixth Zimbabwean to score a fifty and take 4 wickets in an ODI.

The match being played at the same venue, one can expect the pitch to assist bowlers as well as batsmen. The pitch has a reputation of getting difficult to bat as the game progresses as a result of which the team batting first will have a slight advantage. Out of four matches played here in the series, three have been won while batting first.

Afghanistan will be hoping to replicate their performance from the first two games of the series, whereas Zimbabwe need to stick to the basics and do what they’ve been doing over the past two matches. Afghanistan may make couple of changes to the playing XI. Zimbabwean players have peaked at the right time and will look forward to continue with the flow. It’s unlikely that they will disturb the winning combination and one can expect the same playing XI to put in the hard yards. Both teams will give their best shot in the decider, and a cliffhanger is on the cards when they fight for the series at Sharjah. 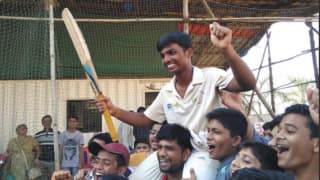