This is it! Afghanistan have beaten Zimbabwe by 28 runs to kick off their campaign in the tri-series with a win. Zimbabwe, meanwhile, have suffered their second successive defeat in as many days. Easy peasy for Afghanistan. They maintain their clean chit over Zimbabwe in this format. 8 matches played, all 8 won. Superb in the past, excellent here again.

13.5 overs: Neville Madziva adjudged LBW! He takes the review but looks to be a waste. Or is it? Impact outside off? Missing off too? The former. Good review from Neville!

13.3 overs: Second 3 wickets for Rashid Khan. Rashid Khan is on a roll, cleans up Ryan Burl, who departs for 25. Zimbabwe have lost their sixth wicket.

9.4 overs: Rashid Khan to Ryan Burl. no run, NOT OUT! Excellent review this from Burl. Forget how high it is the ball is pitched marginally outside leg. Floated leg spinner around leg. Burl looks to flick but misses. There is a huge appeal and the umpire raises his finger. Burl signals the ‘T’ straightaway.

9.3 overs: Burl has been adjudged LBW and he has taken the review. Is the ball missing the stumps? Let us see what the replay’s have to say.

8.5 overs: Gulbadin Naib to Tinotenda Mutombodzi. no run, On top of the stumps, Mutombodzi comes down the track and looks to flick but he misses. The ball hits him right on the box but it was not bowled at pace so no nasty blow.

6.3 overs: WICKET! Just when things were looking steady, Karim Janat strikes and Zimbabwe sink further! Zimbabwe in all sorts of trouble here. Janat steams in and bowls a very full ball on middle and leg. Ervine departs for 10.

The experienced Mohammad Nabi is on now.

Tinotenda Mutombodzi is the new man in. Karim Janat is into the attack.

4 overs: WICKET! ZIMBABWE COLLAPSE! 3 wickets down for ZIM. Out batsman is Sean Williams3.6Fareed Ahmad to Sean Williams. out, OUT c Rahmanullah Gurbaz b Fareed Ahmad. Zimbabwe have lost their third wicket.

3.4 overs: ANOTHER ONE! Fareed Ahmad to Brendan Taylor. out, OUT c Hazratullah Zazai b Fareed Ahmad. Zimbabwe have lost their second wicket. Sean Williams is the new man.

2.5 overs: Mujeeb Ur Rahman to Hamilton Masakadza. out, OUT run out (Rahmanullah Gurbaz). Zimbabwe have lost their first wicket and it’s their captain, who has to depart for 3.

A review on the very first ball!

We are back for the run chase! Brendan Taylor and the skipper, Hamilton Masakadza make their way out to the middle along with the Afghanistan players. Mujeeb Ur Rahman will start off for Afghanistan.

Wow. Some hitting. What happened? When how? From turning into a snooze fest, this attack has woken everyone up from slumber.

Some show put on by @MohammadNabi007 @iamnajibzadran during their 107-run 5th wkt stand v Zimbabwe in Mirpur.

13.6 overs: Ainsley Ndlovu to Mohammad Nabi. no run, The batsman has played that off the front foot and into the ground.

11.2 overs: 3 wickets down for AFG. Out batsman is Najeeb Tarakai. Sean Williams to Najeeb Tarakai. out, OUT! CAUGHT! Tarakai is out of here! Loopy ball on off which bounced a little extra, Tarakai looks to push it towards the off side.

6.6 overs: Sean Williams to Rahmanullah Gurbaz. out, OUT! LBW! umpire’s call! The review is retained but Gurbaz’ fun is over. Williams strikes. The slider, pitching around off and skidding on, Rahmanullah looks to sweep but misses. Is hit on the pads, Williams appeals and the umpire raises his finger. Gurbaz has a chat with his partner and then takes the review. The third umpire takes a while to confirm whether there is no inside edge. The ball is pretty close to the gloves but eventually, he is convinced that the spike on Ultra Edge is not due to the gloves. Ball Tracker shows the ball to be clipping leg stump, which means umpire’s call will stay. 43 from 24 for the debutant.

Rashid Khan: “We will love to bat on it first, looks a fresh wicket. We had a good Test game, we had a good team. Everyone is in good form, we just need to focus and enjoy the game.”

Hamilton Masakadza: “I was quite clear, we are going to bowl first. The guys bowled well with the new ball yesterday, the fielding was good. Those were the positives. It’s a different place and we have a different team, with a few changes. That’ll change our fortunues hopefully. Just a couple of changes, Regis comes in.”

5.37 pm: Hamilton Masakadza has won the toss and Zimbabwe have opted to field in Match 2 of the Triseries against Afghanistan.

5.28 pm: We’re almost ready for the toss. Good news is that there are clear skies at the Shere Bangla National stadium in Dhaka right now which means we will certainly have a scheduled start!

After thumping hosts Bangladesh in the only Test, Afghanistan will look to maintain their ascendancy albeit in a different format when they lock horns with an embattled Zimbabwe in Match 2 of the T20I tri-series in Dhaka. Zimbabwe, suspended by the ICC, but were still extended an invitation by Bangladesh Cricket Board (BCB), lost to the hosts by 3 wickets in the series opener on Saturday. The T20 format is Afghanistan’s most favoured format wherein they have a 69 per cent win record from 71 games and have won each of their last ten matches.

What: Afghanistan vs Zimbabwe, 2nd T20I 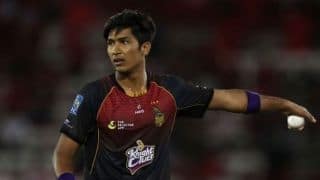 Mohammad Hasnain summoned back to Pakistan from Caribbean Premier League 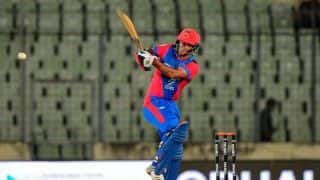