The live streaming of the match is available Afghan Live, along with the live telecast on 1TV in Afghanistan, and DSTV in Zimbabwe.

The fifth and final One-Day International (ODI) series of the series between Zimbabwe and Afghanistan will once again take place at Harare Sports Club. The live streaming of the match is available Afghan Live, along with the live telecast on 1TV in Afghanistan, and DSTV in Zimbabwe. After losing the first two ODIs of the series, hosts Zimbabwe bounced back and surprised with two back-to-back wins and kept the contest alive. On the other hand, Afghanistan, who played impressively in the first two matches of the series; fell apart suddenly in next two ODIs. Zimbabwean bowlers bowled excellently in last two ODIs and they ripped the strong batting line-up of Afghanistan which includes match-winners like opener Mohammad Shahzad, skipper Asghar Stanikzai and all-rounder Mohammad Nabi.

Also, Zimbabwe’s captain Graeme Cremer showed immense improvement as leader of the side and especially the way he used his inexperience bowlers. The fifth and final ODI is third chance for Zimbabwe to claim a bilateral series win over Afghanistan. So far, Zimbabwe and Afghanistan have played three ODI series before the ongoing one and all were played in Zimbabwe. Live blog: Afghanistan vs Zimbabwe, 5th ODI

The first one ended in draw by 2-2, while the other two were won by Afghanistan by 3-2. If Zimbabwe wins this series, then it can be considered as their yet another resurgence in international cricket. Also, it will be a wake up call for Afghanistan just before the T20I and ODI series against Ireland in India. All in all, the fifth ODI can be expected to be an exciting as both the sides have a chance to clinch the series in their favour. 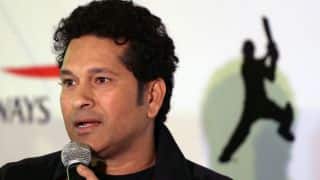 Sachin Tendulkar reading not much in to India's defeat against Australia