Pakistan's limited overs captain Shahid Afridi has admitted that he is not happy with some people in the team management, who are trying to interfere in his work and domain in the team. 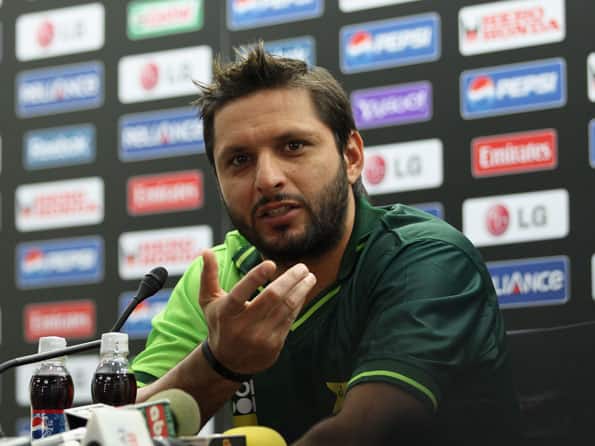 Pakistan’s limited overs captain Shahid Afridi has admitted that he is not happy with some people in the team management, who are trying to interfere in his work and domain in the team.

To reports that he had developed differences with coach Waqar Younis over issues of interference and authority in selection matters, Afridi confirmed on returning to his hometown from the West Indies that there are people trying to interfere in his work.

When asked about his reported differences with Waqar, the flamboyant allrounder quietly admitted that there was something wrong in team affairs but didn’t elaborate much.

“I will soon be meeting with the Chairman of the Pakistan Cricket Board to discuss this issue,” Afridi told the media.

Once again a large number of fans were present at the Karachi airport to support him and raise slogans in his favour.

Afridi was said to be so upset with Waqar’s behavior that he was reluctant to play the last two One-day Internationals against the West Indies but was persuaded by team manager Intikhab Alam to play and lead the team in those two games.

Pakistan lost both the matches but still managed to win the five-match ODI series 3-2.

Sources aware of developments in the team also disclosed that Afridi had even left the team meeting held before the fifth and final ODI, because of his differences with the coach.

“It was Intikhab who spoke with Afridi and told him that being the team captain it was his duty to play, if fit and that if he had any grievances he should discuss it with the board on returning home.

“Not only Afridi but it appears as if some senior players are also not happy with the way Waqar is handling things in the team and particularly his role in selection matters,” one source said.

Afridi said he regretted the fact that Pakistan was unable to complete a whitewash in the One-day series against the West Indies.

“I hope the team can now go and win the Test series.”

Afridi said he would spend some time with his family and thereafter would be leaving for US for some welfare work and later on for England for representing Hampshire county.

The PCB Chairman Ijaz Butt, meanwhile, also had to hold a meeting with Pakistan chief selector Mohsin Khan last Thursday to convince him not to resign from his post after the latter blamed Waqar of interfering in the matters of the national selection committee.

The head coach, however, said that he has no differences or problems with any player — senior or junior — and tried his best to create unity in the team.