Suspended Pakistan cricket star Shahid Afridi on Tuesday filed a petition in court demanding that sanctions imposed on him by the Pakistan Cricket Board be overthrown and calling for justice. 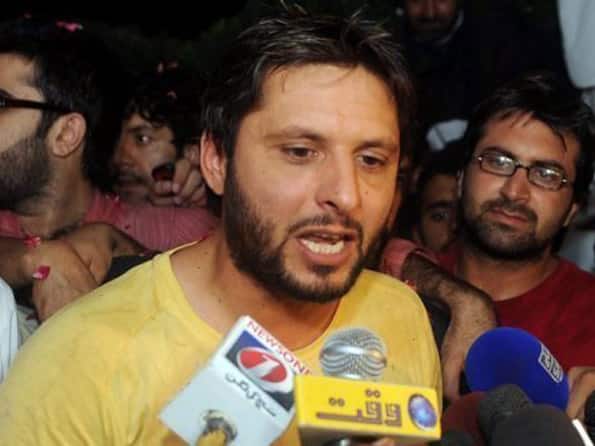 Suspended Pakistan cricket star Shahid Afridi on Tuesday filed a petition in court demanding that sanctions imposed on him by the Pakistan Cricket Board be overthrown and calling for justice.

A long running slanging match between Afridi and Pakistani managers has rocked the game, still reeling from the aftermath of a spot-fixing scandal which ended in lengthy bans on Salman Butt, Mohammad Asif and Mohammad Aamer.

“I have taken a plea that the show-cause notice served on me is illegal and the ban on me playing abroad should be lifted and I hope justice will be done,” Afridi told AFP after filing the petition in the southern province Sindh.

“We have filed a petition in the Sindh High Court against the sanctions on our client Afridi and have appealed for a stay order against the punishments against him,” his lawyer Mahmood Mandviwala told AFP.

Court officials said proceedings on Afridi’s case began immediately under a two-member bench of chief justice Musheer Alam and Aqeel Ahmed Abbasi. They swiftly ordered the Pakistan Cricket Board (PCB) to adjourn a disciplinary committee meeting, before which Afridi had been summoned to appear on Wednesday.

“The court has ordered the PCB to adjourn the June 8 meeting and asked PCB officials to appear on Thursday,” said a court official. Afridi took legal action after announcing his retirement from international cricket to protest against being replaced as one-day captain last month.

The PCB said Afridi breached the players’ code of conduct by announcing his retirement and levelling allegations against the Board. The PCB suspended his central contract, revoked all his no-objection certificates which would have allowed him to play in England and Sri Lanka and served him with a show-cause notice last week. They also formed the three-man disciplinary committee before which Afridi was ordered to appear on Wednesday.

The 31-year-old former one-day captain is the latest in a series of Pakistani cricketers to launch legal battles against the cricket authorities. The last was paceman Shoaib Akhtar, whose appeal against sanctions imposed in 2008 for publicly criticising the PCB is still pending in court in the eastern city of Lahore.

Afridi’s petition was filed after Pakistan coach Waqar Younis and manager Intikhab Alam described him as “immature and unwilling to listen” in tour reports leaked to the media and published in the Dawn newspaper on Tuesday.

“As captain I feel he is still very immature, has poor discipline, lacks game plan and is unwilling to listen to others’ opinion or advice,” wrote Waqar of the West Indies tour where Afridi led the team to a 3-2 win in May.

It was Afridi’s public criticism of Waqar last month over “undue meddling” in team selection, which forced the PCB to serve him with a show-cause notice and then dump him as captain. In his report, Waqar said coaching staff had failed to improve Afridi’s behaviour, saying that “sometimes his volatile and immature nature have proved detrimental and led to unfortunate outcome of the game losses”.

Waqar said Afridi created a fuss during the fourth and fifth one-day match on the West Indies tour. “Afridi came into the meetings with a decisive mindset and was refusing to discuss the playing 11 options for the team and behaved very inappropriately and walked out of the meeting,” wrote Waqar in his report.

“Afridi’s attitude and unwillingness to sort out matters led to a very uncomfortable dressing room environment which affected the players’ performance, resulting in the last two losses of the series.”

Alam said he tried his “best to defuse the situation”, but blamed Waqar for being a “little harsh and arrogant which creates problems” and accused Afridi of lacking temperament and being “highly hyperactive”.

“I told him not to speak to the press on his return home and if he had any serious issues with Waqar or anybody else he should speak to the PCB chairman (Ijaz Butt) directly,” wrote Alam.

Afridi’s lawyer Mandviwala blamed the PCB for maligning his client by leaking the reports.