The Pakistan Cricket Board confirmed on Tuesday that Chairman, Ijaz Butt had held a meeting with Pakistan's former captain and all-rounder Shahid Afridi but refused to divulge any details of the unexpected meeting in Islamabad. 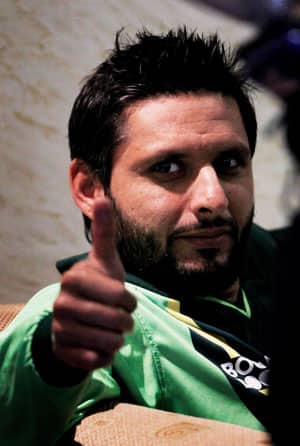 A sourece said that PCB might impose a token fine and seek an apology from Shahid Afridi, and issue him NOC’s to play in England and Sri Lanka Getty Images

The Pakistan Cricket Board confirmed on Tuesday that Chairman, Ijaz Butt had held a meeting with Pakistan’s former captain and all-rounder Shahid Afridi but refused to divulge any details of the unexpected meeting in Islamabad.

“Yes, we can confirm that a meeting has taken place between the Chairman and Shahid Afridi but we are not in a position to give out details of the discussions that took place at this meeting,” a spokesman for the board said.

Sources have said the meeting could lead to a resolution of the ongoing dispute between the two parties. Well placed sources confirmed that a meeting had taken place on the insistence of a government official close to President Asif Zardari who is chief patron of the board.

“It has been decided in the meeting that Afridi will withdraw his petition from the Sindh high court and appear before the disciplinary committee of the board,” another source divulged.

He said in return for Afridi’s compliance the board’s disciplinary committee will impose a token fine and seek an apology from him while the board will immediately issue him NOC’s to go and play in England and Sri Lanka.

No official of the board was willing to confirm or deny the development but the sources said the meeting had taken place at a undisclosed location and the PCB would later in the day release details.

The source said the meeting was held because the President also wanted a quick resolution to the ongoing dispute while Afridi himself had been keen to get out of the muddle that he found himself after submitting a petition in the high court against the disciplinary proceedings and committee of the board.

“Butt was not very keen to go for a settlement but had to cool down on the insistence of some government officials who pointed out to him that Afridi would accept the law of the board but the dispute should be resolved since it was damaging the image of Pakistan cricket,” the source said.

Afridi himself was keen to get the NOC’s to play for Hampshire and in the Sri Lankan premier league next month as both contracts meant lot of lucrative benefits for him.

Two years under Chappell was worst in my career: Zaheer