Today, a Pakistan attack led by the craftiest spinner and arguably the most complete fast bowler in the one-day format, and wonderfully supported by two street-smart off-spinners set up a crushing win that catapulted their side into the World Cup semi-finals. Arjuna Ranatunga, who marshalled an attack that mirrored Pakistan s for years, would have been proud of his effort. 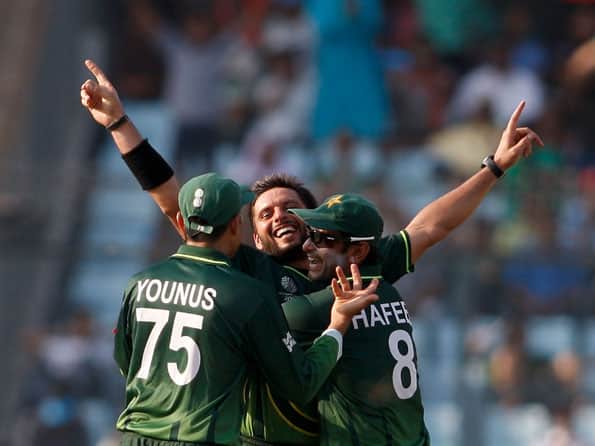 There was a distinct Sri Lankan hue to this victory. For years, Sri Lanka s successful mantra for winning at home revolved largely around a phalanx of canny spinners and one crafty fast bowler who choked the life out of the opposition. Today, a Pakistan attack led by the craftiest spinner and arguably the most complete fast bowler in the one-day format, and wonderfully supported by two street-smart off-spinners set up a crushing win that catapulted their side into the World Cup semi-finals. Arjuna Ranatunga, who marshalled an attack that mirrored Pakistan s for years, would have been proud of his effort.

For years Pakistan bowling meant fast bowlers, reverse swing and toe-crushing yorkers. But over the last few years, with talent not as forthcoming and Shahid Afridi s stock as a bowler rising exponentially, the balance of power has shifted. It can be traced to the inaugural ICC World Twenty20 in 2007, when Afridi the bowler came spectacularly to the forefront. That tournament also catapulted Umar Gul into a new league as a limited-overs bowler, and in this World Cup much like Sri Lanka in 1996 Pakistan have been carried by their pace spearhead, a spinner with a bag of tricks, and a supporting act of slow bowlers used in various roles.

This win was so comfortable that it was startling. While you can accuse the West Indies of lacking in courage and soul, so controlled was Pakistan s display in the field that it could have been even more devastating for West Indies had Shivnarine Chanderpaul and Ramnaresh Sarwan tried to force the pace early.

Afridi and Mohammad Hafeez will walk away with the plaudits, but the footing was laid by yet another outstanding opening spell from Gul. After starting off with a short ball that was duly crashed for four, Gul allowed just seven more runs from his next 29 deliveries while claiming the biggest wicket of them all. Having already been charged and lofted over mid-off in his second over, Gul saw Chris Gayle charge two deliveries later but didn t drag back the length because that could allow Gayle to heave over the circle or slash over backward point. Instead, he pitched it wider and made Gayle come after the ball, and the result was a catch to Afridi at mid-off. Such quick-thinking makes the difference in crunch situations. Gul continued to be Pakistan s most impressive bowler, combining his height with a keen understanding of the nature of the pitch to make run-scoring difficult, while delivering a tremendous start.

On the eve of this match, Waqar Younis had spoken of the approach of instilling in every team member the confidence to perform and to wipe about the previous match. Their incredible confidence levels shone through in the manner in which Afridi gave the new ball to Hafeez, who choked the life out of West Indies in an asphyxiating spell of 8-2-13-3.

West Indies struggles to figure out Hafeez were mind-boggling. Devon Smith and Darren Bravo were clueless against arm balls and fatally chose to play from the crease. To those West Indians who have lifted the World Cup twice, it must be maddening and unfathomable to watch Smith and Bravo. You would have expected some spine, not to see them grope like the blind against the wall when facing Hafeez s arm balls. In Bravo s case the talent there for all to see, but if harmless off-spin landed in the right areas no massive turn or bounce proves difficult to handle, what does the future hold? Bravo s latest failure came in a tournament where he has been dismissed by fearsome luminaries such as Peter Seelar, Kevin O Brien and James Tredwell.

From that double-wicket maiden over, the sixth of the innings, West Indies managed just six runs off the next six overs. Just when it appeared they may dig their way out of a hole, Afridi struck. Beginning with a maiden that included two very loud lbw appeals, Afridi confounded West Indies. No runs were given easily and neither Ramnaresh Sarwan nor Shivnaraine Chanderpaul had time to gather thoughts about the opportunities to score that had just passed by. Slow, quick, googly, off-break, slider, leggie; each was tossed down with the same zest and speed with which Afridi has played his entire career. Sarwan s struggles against Afridi he was also dropped by Gul at long-off ended when he was undone by one that bounced.

Unfortunately for West Indies, Afridi was just getting wound up. At 58 for four, much rested on Kieron Pollard, but he too fell to Afridi who knew of his struggles against spin. First, Afridi impressed with his attacking field placements. Pollard s presence immediately procured a slip, and two deliveries into his brief stay he had to contend with a short leg and silly point. It was imaginative captaincy, and the set-up was beautiful.

The first ball Pollard was from Afridi was fired into the pads, the second, a googly, tossed up on a length, the third a wide down the leg side. Cue the sucker-punch: it was the trademark quicker one, bowled from wide of the stumps, and it skidded on to cramp Pollard who tried to cut. Fatal mistake. Somehow Kamran Akmal managed to hold on to the edge, and Pakistan were ecstatic.

Devon Thomas lasted one ball, struck dead in front by an even nastier delivery that was quicker than Darren Sammy s average speed, and Afridi had knocked the stuffing out. Then it was Saeed Ajmal s turn to cash in, and two wickets in the next over, the 28th, left West Indies 71 for eight. They had lost five wickets for 13 runs. Chanderpaul and Kemar Roach delayed the evitable, which came when Afridi beat Ravi Rampaul s ambitious sweep with a googly in his final over. Yet again the charismatic Pathan couldn t put a wrong foot forward.

West Indies batting was, putting it mildly, shambolic. The batsmen played for turn when it wasn’t there, shouldered arms when it was, and, in the instance of Devendra Bishoo, did their best to cover the cover the line and smother the spin, only to be bowled and left bewildered. Afridi, Hafeez and Ajmal played on the batsmen’s minds and their techniques, undoing them with a combination of floaters and faster ones, and, stalled by a skiddy surface, West Indies had no answer.

The day was Pakistan’s, and after usurping Australia earlier, they weren’t about to let go. The scary thing is that we don’t know if Pakistan were on top of their game, because they could always get even better.

Pakistan on a Caribbean cruise