Pakistan captain Shahid Afridi said the performance of his side's younger players had been among the positives of a World Cup campaign that ended with a 29-run semi-final loss to India. 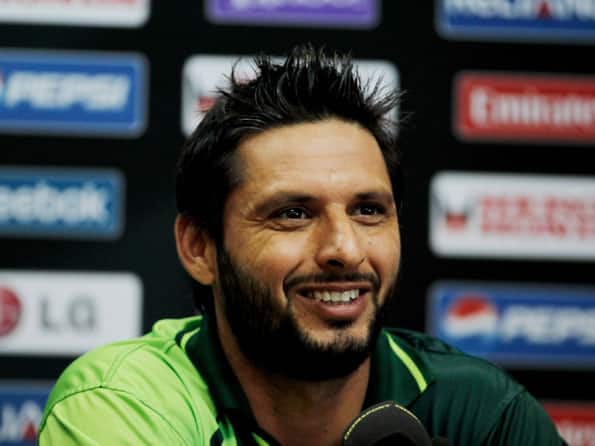 Pakistan captain Shahid Afridi during a press meet ahead of their 2011 ICC Cricket World Cup semi-final match at the Punjab Cricket Association (PCA) Stadium in Mohali, on March 30. India won by 29 runs.

Pakistan captain Shahid Afridi said the performance of his side’s younger players had been among the positives of a World Cup campaign that ended with a 29-run semi-final loss to India. And he said he hoped Wednesday’s match, watched by Indian Prime Minister Manmohan Singh and Pakistani counterpart Yousuf Raza Gilani, would be the catalyst for more games on Indian soil.

Pakistan have been unable to play matches at home since an armed attack on Sri Lanka’s team bus in Lahore in 2009. Now Afridi wants to see the restoration of normal cricket ties with India as part of his country’s sporting rehabilitation.

“We want to play in India, we have shown them our hospitality in the past, I hope they do so too,” the all-rounder said. Pakistan saw 25-year-old left-arm quick Wahab Riaz take a career-best five for 46 as India were held to 260 for nine in the semi-final.

But the Pakistan innings struggled to get going in the face of accurate Indian bowling. Only 20-year-old Umar Akmal threatened to keep up with the run-rate whilst Misbah-ul-Haq faced 76 balls for his 56 before the 36-year-old was last man out.

“I’m proud of my team, the boys have really done a great job in this competition. We played as a unit and no-one was expecting us to play cricket like this so I’m very happy as a captain,” said Afridi.

“I think the youngsters really performed well. Asad Shafiq and Umar Akmal played well and I hope they will do well in the future. I think we have played better than in the 2003 and 2007 World Cups,” said Afridi.

Pakistan cricket has been under a cloud since last year’s ‘spot-fixing’ scandal in England which led to bans for new-ball duo Mohammad Aamer and Mohammad Asif as well as former Test captain Salman Butt.

“It has been a difficult 10 months for us,” Afridi said. “I am thankful to my board officials and team management for backing me. We had a rickety team coming into the World Cup and considering that it has been a good performance.”

As for Riaz, he added: “We didn’t bowl well with the new ball, but because of his bowling we came back, otherwise I thought they would have scored about 300. It was a great bowling performance from him.”

Riaz was selected after Pakistan felt they could not risk Shoaib Akhtar, meaning there was no fairytale farewell for the ‘Rawalpindi Express’, who had said he would retire from international cricket after the World Cup.

“We wanted Shoaib Akhtar to play but he was struggling,” Afridi explained. “We could not play someone who is at 50 percent or 60 percent of peak fitness. Riaz played in his place and you have seen his performance.

India’s total of 260 for nine was built on Sachin Tendulkar’s 85 but Pakistan did not help their cause by dropping the man-of-the-match four times. However, Afridi eventually held the chance that ensured his pre-match prediction that Wednesday would not be the day when Tendulkar scored his 100th international hundred came true.

“I want to congratulate the India team and the whole nation. I think they deserved to win,” Afridi said. “I think we made some big mistakes in the fielding, we dropped some catches, like for Sachin. Like I told you, Sachin didn’t score a hundred.”

India now face Sri Lanka, beaten by Pakistan in the group phase, in Saturday’s final in Mumbai and Afridi could not pick a winner. “Both teams are playing very good cricket, both teams are well balanced.”