The SmartBall may make its debut during the upcoming edition of the Big Bash League.

After witnessing many innovations, including the zing bails, the game is now set for one more innovation as a cricket ball with an embedded microchip may make its debut in the upcoming Big Bash League (BBL) as the ball manufacturer Kookaburra is reportedly in the final stages of testing the ball.

A report in The Age said that the ball will deliver instant statistics on speed, which will be accurate and comprehensive in nature in comparison with the normal radar, at the release point, pre-bounce and post-bounce. The report also added that the SmartBall will also measure the revolutions on the ball.

The report also stated that there are plans to make use of the ball to help the umpires and the Decision Review System (DRS).

Kookaburra, as per the report, is confident that the ball will be used across many Twenty20 leagues across the globe, with BBL being its first target, and it finds success in the T20 leagues, the SmartBall will make its way to international cricket.

The Kookaburra SmartBall is here.

It looks, feels and moves the same way as a regular Kookaburra cricket ball, but collects and communicates instant statistical data on revolutions, speed.

Want to change the way you play? Register your interest today: https://t.co/7RMWoXTmTJ pic.twitter.com/e8dgHThtEw

England wicketkeeper-batsman Jos Buttler gave his approval to use this ball in the Test cricket. “Absolutely. It’ll be a great coaching tool and for viewers as well, it’s amazing to see that instant feedback. It seems to behave exactly the same as a regular ball,” said Buttler. 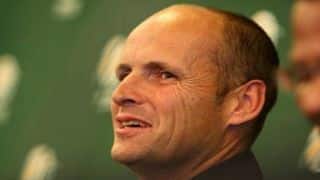