Ahmed Shehzad claims flying back home due to back strain

Ahmed Shehzad claims flying back home due to back strain

Ahmed Shahzad accepts feeling disappointed on not been selected in the T20I squad.

Karachi: Pakistan‘s out of favour opener Ahmed Shehzad has rubbished reports that he left the ongoing National T20 Championship because he was dejected at not being considered for the T20 match against England on September 7 in Manchester. “Obviously I remain disappointed that I am not in the Pakistan squad but the reason for me leaving the national T20 was a back strain that I suffered during the event,” Shehzad said yesterday. He said that he had already been called to the national cricket academy for an examination and rehabilitation for his back strain.
“The back strain was the reason I couldn’t carry on any longer in the national event where I was leading the Lahore team,” he added. ALSO READ: Pakistan vs England 2016: Ahmed Shehzad flies back home following T20I snub

The opener who has been out of the national team since the World T20 in India this year said he had informed the Lahore team management about his fitness issue before leaving. “Having played for Pakistan every time I can’t make the squad I am disappointed as every professional player should be. But to say I left the national T20 because of this is not unfair and false,” he claimed.

Shehzad who has scored centuries for Pakistan in all three formats of the game said he was trying hard to regain full fitness and confidence of the selectors. Shehzad and Umar Akmal were both sidelined by the national selectors after the World T20 with chief selector, Inzamam-ul-Haq saying they were dropped on disciplinary grounds. According to Inzamam both needed to work on their cricket and general discipline to be considered for national selection again.

Both have already apologized to the cricket board and insist they are are ready to follow any reformation by the PCB to be considered for national selection again. While Shehzad struggled in the national T20 event, Umar Akmal has been in flowing form strengthening his case for a recall to the national team for the T20 and ODI series against the West Indies in the UAE from September 23.

Akmal scored a blistering 115 from 48 balls with nine sixes and nine fours playing for Lahore Whites against Rawalpindi on Monday in the national T20 event which has now moved to Pindi from Multan. 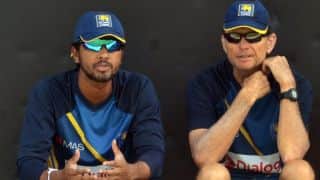