Shehzad feels honoured on being linked to the T20 captaincy for Pakistan.

Pakistan opening batsman Ahmed Shehzad has said that he feels honoured on being linked to the Twenty20 (T20) captaincy for the national team.

Shehzad, whose name popped up for Pakistan’s T20 captaincy along with others including fan-favourite Shahid Afridi and Umar Gul, said that it is an honour to represent his country and that it would be a dream come true for anyone to lead the national team.

The opener said that he does not want to get carried away with his name being linked to captaincy because it is his duty as a professional to give 100 percent to his squad and country under any captain, The Express Tribune reported.

Shehzad said that his primary focus is to perform for Pakistan and win matches, adding that all other things are secondary.

After Mohammad Hafeez stepped down as Pakistan’s T20 captain following the nations poor ICC World T20 2014 performance in Bangladesh, the Pakistan Cricket Board (PCB) has reportedly been looking at various options to replace him.

However, the PCB has not yet finalized the player who would lead Pakistan in the shortest format of the game, the report added. 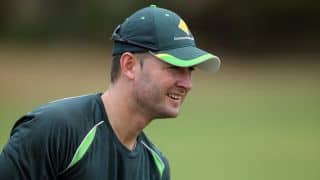