Ahmed Shehzad hurts elbow, but expected to be fit for ICC World Cup 2015 clash against India

Ahmed Shehzad hurts elbow, but expected to be fit for ICC World Cup 2015 clash against India

During Pakistan’s net session, Shehzad was seen in pain while holding his right arm.

Ahmed Shehzad seemed to have hurt himself during Pakistan’s training session at the Adelaide Oval on Friday. Pakistan started their training session in the morning with a few fielding drills, and then proceeded to the nets behind the stadium. Shehzad is one of Pakistan’s main batsmen and is a crucial factor heading into the all-important clash against India at the ICC Cricket World Cup 2015. A Pakistan team official told CricketCountry that Shehzad will be fine and had a precautionary X-Ray. ICC Cricket World Cup 2015: POINTS TABLE

During Pakistan’s net session, Shehzad was seen holding his right arm and looked in some pain while doing so. He also threw his bat in disappointment as he left the nets. Later, as some of his teammates bowled at the main Adelaide Oval, a member of the support staff had a look at his arm. Shehzad then sported an ice back on his right elbow as he walked inside the Oval. ICC Cricket World Cup 2015: SCHEDULE & MATCH DETAILS

Pakistan would hope that this is merely a small concern as they are two days away from facing their arch-rivals in the big World Cup clash. They would want all their main players fit for this encounter. Shehzad has been one of the most consistent players for Pakistan over the last one year. ICC Cricket World Cup 2015: Complete Coverage 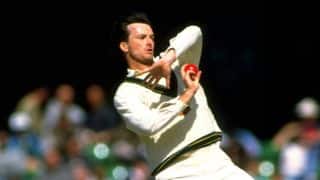