Shehzad will now look to stick to the crease till the end of the innings.

Ahmed Shehzad brought up his half-century in 36 deliveries against Kolkata Knight Riders in the seventh match of the group stage of the ongoing Champions League Twenty20 (CLT20) 2014 at the Rajiv Gandhi Stadium in Hyderabad. 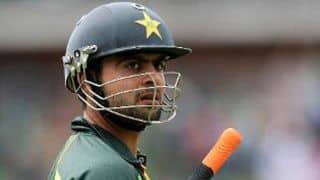