Mumbai Indians opener Aiden Blizzard feels that team s top order is peaking at the right time and that they have a good batting combination ahead of the finals against Royal Challengers Bangalore on Sunday. 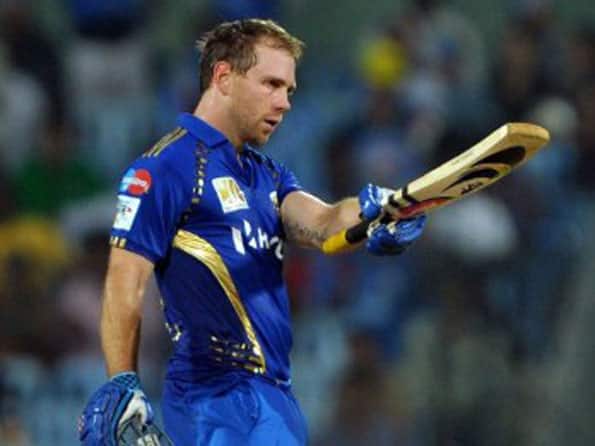 Mumbai Indians opener Aiden Blizzard feels that team s top order is peaking at the right time and that they have a good batting combination ahead of the finals against Royal Challengers Bangalore on Sunday.

Blizzard was quoted in CLT20 as saying,” Yes, we are (peaking at the right time). It’s been tough and we’ve played on some different wickets from game to game. I think we have finally got that combination right now.”

Blizzard who scored 54 from 39 balls helped Mumbai set a target of 160 runs. “It was good to contribute to that score,” he said.” We knew that if we had decent score on the board it would be very difficult for Somerset as they must be pretty tired after a long season. It was also their first game in Chennai and it was really hot.”

Blizzard also mentioned absence of seniors like Sachin Tendulkar added extra pressure on him to perform in the semi-finals.

He said,” I wasn’t thinking about it but I knew since we have one less international player in the side, the pressure was on me to make a bigger contribution. It was good to score runs at the top and get some steady partnerships going throughout the innings.”

The opening batsman believes the 10-run win over Somerset has boosted team s morale and they are confident of going all the way to win the finals against RCB. “Yes, absolutely. We’ve got some great players and a wonderful support staff.

“To the whole of Mumbai Indians organisation this tournament means a lot. We’re into the final and we’ve got to climb that last hurdle. Hopefully, we can go out there and take that one last step that we haven’t been able to do in the past.”

Blizzard admitted that Kieswetter almost stole the match away from them but felt James Franklin and Lasith Malinga s shrewd bowling helped them to stop the Somerset opener at the right time.

“Yes, he batted really well. We were lucky that James Franklin came on and got those two wickets in the second last over. Malinga then bowled the final over and hit the stumps like he usually does. Franklin’s over was the turning point of the match,” said Blizzard.