The union sports minister Ajay Maken feels that banning the Indian Premier League (IPL) is not a solution for putting an end to the controversies although corrective measures needed to be taken in order to clear the mess. 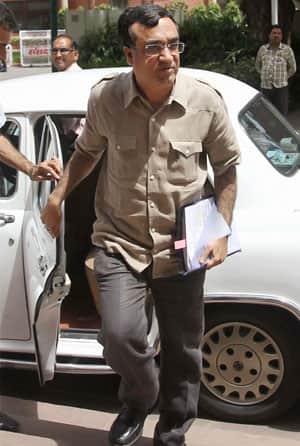 Union Sports Minister Ajay Maken said if the Board wanted to be an honest watchdog, it must not have any conflict of interest with the IPL. PTI

The union sports minister Ajay Maken feels that banning the Indian Premier League (IPL) is not a solution for putting an end to the controversies although corrective measures needed to be taken in order to clear the mess.

“Banning is not the solution. I think we should rectify the anomalies,” said Maken.

“I’ve three suggestions in this respect. First of all, there should be no politician managing the affairs of cricket; secondly the BCCI and IPL should come under the RTI, and should be managed by the cricketers, there should be at least 25 per cent of former players in the management of BCCI.

“Thirdly, BCCI and IPL should distance from each other,” Maken told CNN-IBN in an interview.

Maken said if the Board wanted to be an honest watchdog; it must not have any conflict of interest with the IPL.

“If BCCI has to be the honest watchdog, then it should not have conflict of interest with the IPL. So with these three things, I am sure the IPL will automatically improve and it will be a step in the right direction as far as the sport of cricket is concerned,” said Maken.

While he did not take the names of his fellow politicians who are playing an active role in managing the cricketing affairs in India, Maken said that a particular sport should be run only by the experts of the game.

“I would not go into the names but all these names cut across party lines. The politicians managing cricket at different levels belong to different political parties. Please leave the game of cricket to the people who have specialised knowledge of the game or former players. Politicians should do their own job in parliament or way,” Maken stressed.

Although he didn’t take names, Maken stressed that when he is speaking about politicians, it includes politicians from his own party also.

“Including my own party. I am saying all politicians who have no domain knowledge of the game, who have never held a bat in their hand, why should they run the affair of cricket? Let the cricket be run by the experts who know about the game, know about the management of the sport.

“Unless you do these things, you will be having these controversies coming up and credibility crisis in days to come,” he added.

Elaborating on the accountability factor in the IPL, the Minister said: “I would like to reiterate the both BCCI and IPL should come under the RTI. They should make everything transparent.”

Meanwhile, regarding the arrest of Royal Challengers Bangalore’s Australian player, Luke Pomersbach for allegedly molesting an American woman, Maken said that the franchise should have first inquired about the player before selecting him.

“I don’t know. As far as Mr Vijay Mallya is concerned, he should also answer to the fact. Did he first inquire into what kind of player this Australian player is. He has also past history of such incident in Australia in Queensland. He had such kind of fight in Australia as well.

“So, before selecting him to bring to India in our country, has he found out his history? He has history of alcoholic abuse, he has history of such brawls in his own country. So, all such things they should have done,” Maken said. (PTI)