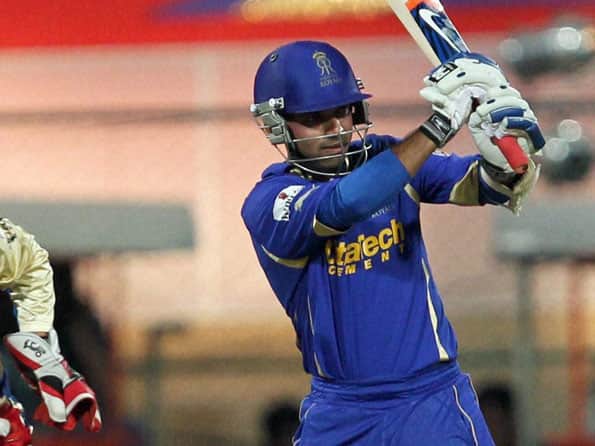 Rahane produced a scintillating 103-run unbeaten knock off just 60 balls and together with Owais Shah (60) stitched 121 runs off 8.2 overs for the second wicket to guide Rajasthan to the commanding total.

Rahane carried on his good form in the tournament and showed his intentions from the onset after Rajasthan skipper Rahil Dravid won the toss and opted to bat at the R Chinnaswamy Stadium. He decorated his unconquered innings with 12 boundaries and five huge sixes to stamp his authority on the highest run–scorer of the tournament list.

Rahane was a treat to watch as he pulled, cut and drove RCB bowlers with consummate ease during his century knock.

Coming in at number three position, Shah provided Rahane the perfect support from the other end, scoring a quickfire 60 off just 29 balls during which he struck five fours and as many sixes.

Electing to bat, Rajasthan made a steady start, putting on 61 runs for the first wicket before losing Dravid.

Dravid made 25 off 32 balls with the help of two boundaries before perishing in the 11th over, stumped by de Villiers of Rajasthan skipper Danile Vettori’s (1/20) bowling.

But in-form Rahane was in no mood to relent as he first clobbered Muttiah Muralitharan over long-on for a six in the next over to keep the run rate up.

If that was not enough, Rahane then hit left-arm pacer Sreenath Aravind for six consecutive boundaries in the next over to not only pick up 24 runs off the next over but also race to his half century off just 41 balls.

New man in Shah also used his long handle to great effect from the onset and smashed Chris Gayle for two sixes and a boundardy to notch up 21 runs in the 16th over.

Both Rahane and Shah matched each other stroke by stroke and did not spare a single RCB bowler, finding boundaries and sixes at will.

The duo added salt to RCB’s injury when Rahane smashed R Vinay Kumar over midwicket in the 17th over for a huge one.

Shah then joined the party and dismissed the bowler for two consecutive sixes and a four to score his fifty of mere 19 deliveries.

Both Rahane and Shah treated the RCB bowlers with utter disdain during their century stand.

RCB, however, tasted their second success in the penultimate over when Shah was holed out to Vinay Kumar off Zaheer Khan (1/15), but by then he had already done the damage along with Rahane.

Shah’s dismissal had no effect on Rahane, who went about his business in style, reaching his century in style off just 58n balls, hitting Vinay Kumar for a boundary straight over his head.