Ajinkya Rahane completed his third half-century in Test cricket as India were struggling at 170 for nine.

Ajinkya Rahane completed his third half-century in Test cricket as India were struggling at 170 for nine on the final day of the third Test match against England at Soutmapton.

Moeen Ali registered his maiden five-wicket haul as India were left staring at a big defeat in the third Test match against England at Southampton. Earlier, India lost two wickets in quick succession in form of Rohit Sharma and MS Dhoni early on the final day. India were reeling at 120 for six after 47 overs chasing 445 runs to win against England in the third Test match at Southampton.

Dhoni and Rohit were both caught behind by Jos Buttler off Anderson, who has been terrific this morning. 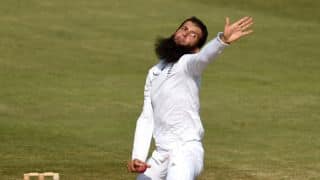