Ajinkya Rahane played some sublime shots to get to his fifty.

Ajinkya Rahane has reached a sedately composed fifty against Australia in the third One-Day International (ODI) at the Melbourne Cricket Ground (MCG). He played some sublime strokes against decent bowling and has reached the fifty at almost run-a-ball without taking risks. He’s now been involved in a decent partnership with Kohli and as the final overs approach the duo will want to step down on the gas in order to give India’s innings good impetus. Rahane played a fine knock in the first innings of the second game at Brisbane and will look to replicate that now. FULL CRICKET SCORECARD: India vs Australia 2015-16, 3rd ODI at MCG

India had a poor start to the innings with on-song Rohit Sharma getting out cheaply for six runs. Shikhar Dhawan looked very edgy early on. Virat Kohli changed things for India. He played some amazing strokes and is now batting on a century. Kohli’s innings unfurled in beautiful fashion as he played an innings which saw a mix of singles and boundaries. UPDATES: India vs Australia 2015-16, 3rd ODI at MCG

Earlier Australia skipper Steven Smith opted to put India in after having won the toss. Chasing has worked very well for them in the previous two ODIs and they will look to replicate the trend here at Melbourne. Australia will want to close the series win by winning this game. For India it is now a do-or-die situation in terms of trying to keep the series alive having lost the first two games at Perth and Brisbane. 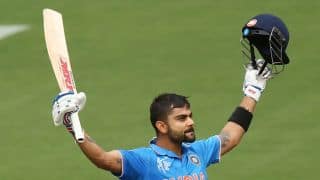