Ajinkya Rahane Could Replace Virat Kohli at No 4: Sunil Gavaskar

Ajinkya Rahane Could Replace Virat Kohli at No 4: Sunil Gavaskar

Speculations have been rife as to who will lead India in regular skipper Virat Kohli’s absence and bat at his preferred No 4 spot. Former India opener Sunil Gavaskar feels Ajinkya Rahane would lead the side in Kohli’s absence and he would be the one who would also play at No 4.

“Virat’s obviously there only for the first Test then you’d expect Rahane to take over (as captain) but they (India) have to find someone to bat at No.4. Who do you expect to take that No.4 spot?” – Ponting asked Gavaskar during the discussion on 7 Cricket.

“It looks to me it could be KL Rahul. Or no, actually I think Rahane will go at No.4 once Virat goes away,” Gavaskar responded.

“Then you might have Rahul bat at No.5 or Shubman Gill,” the former India captain added.

Kohli would return to India after the first Test at Adelaide – which would be played with a pink ball and under lights.

Following a dream IPL, KXIP skipper KL Rahul was picked for the Test squad and if he gets to make the cut in the XI, it would be his first appearance since August last year.

On the other hand, young Gill would be hoping for a Test debut in whites.

With Kohli being one of the key players in the side, India is bound to miss his services in the upcoming four-match Test series. Babar Azam Has to Become a Leader Like Virat Kohli: Rashid Latif 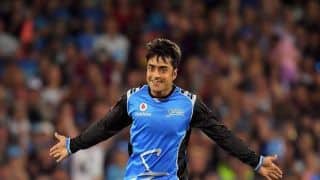