India are in trouble yet again.

Ajinkya Rahane has been dismissed in the 16th over of the first Test between India and England at The Oval. Chris Jordan took the wicket as Rahane played one back and it was taken in the follow through. Jordan thus took his second wicket.

India are in deep trouble now at 28 for four. Murali Vijay has weathered the storm and has stayed in the middle even as wickets have fallen around him. Gautam Gambhir, Cheteshwar Pujara and Virat Kohli were dismissed earlier. 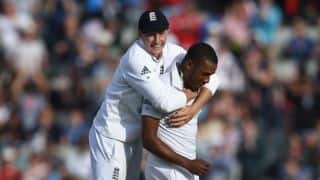 Virat Kohli dismissed; India in doldrums in 5th Test against England at The oval Sri Lanka vs Pakistan 2014, 2nd Test at Colombo (SSC): Rangana Herath shines with the ball again as Pakistan reach 244/6 at stumps on Day 2