Ajinkya Rahane was dismissed in the 38th over by Suraj Randiv for 111 runs in the first ODI played against Sri Lanka at Cuttack. Rahane and Dhawan were involved in a 231-run opening stand but both batsmen were dismissed soon after completing there centuries. India were 247 for two after 38 overs and Virat Kohli joined Suresh Raina. 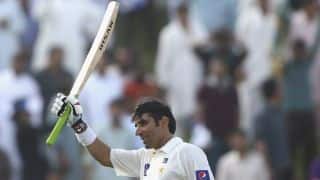