Currently, RR are 40 for the loss of a wicket in six overs with opener, Shane Watson on 17.

Rajasthan Royals (RR) opener, Ajinkya Rahane was dismissed for 23 by fast-bowler, Mohit Sharma after being caught by Dwayne Bravo, against other former champions, Chennai Super Kings (CSK), in Match 47 of the 2015 Indian Premier League (IPL) at the MA Chidambaram Stadium on Sunday. Currently, RR are 40 for the loss of a wicket in six overs with opener, Shane Watson on 17 and Steven Smith coming in. Live Updates: Chennai Super Kings vs Rajasthan Royals

Earlier, CSK skipper, MS Dhoni won the toss and elected to bat first, as they finished on 157 for the loss of five wickets, courtesy of an impressive knock of 81 from Brendon McCullum. Dhoni went on with an unchanged squad, while RR skipper, Steven Smith made a couple of changes in the form of Ankit Sharma and Rajat Bhatia, who were in for Stuart Binny and Dhawal Kulkarni. Live Scorecard: Chennai Super Kings vs Rajasthan Royals 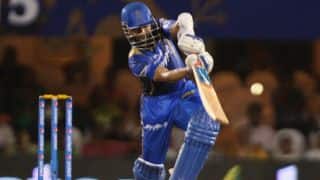