Rahane and Bhuvneshwar are involved in a good partnership.

Ajinkya Rahane has reached his half-century in the second Test between India and England at Lord’s. India were in dire straits after losing Stuart Binny after tea. But, Ajinkya Rahane has fought hard and he got his half century off 101 deliveries.

India had gone into tea at 140 for six. After they returned, they lost Binny. But since then, Bhuvneshwar Kumar has fought hard with Rahane and has kept England at bay. On this green surface, it is important for Rahane to concentrate and leave deliveries outside the off-stump. And, he has done just that. 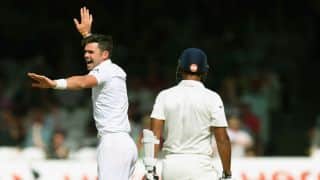