Rahane was dismissed by Broad.

Ajinkya Rahane, India’s centurion of the first Test at Lord’s, has been given a rough decision in the second innings. Rahane had come in after Liam Plunkett got through Cheteshwar Pujara and Virat Kohli in no time. Given his form in the first innings, a lot was expected of him. However, he had to walk back after making only five runs as umpire Bruce Oxenford erred and gave him out.

Plunkett got Pujara and Virat Kohli off consecutive deliveries to get England back in the game. And then later, Ajinkya Rahane was out to a short one from Stuart Broad as he tried to fend it. The ball had in fact hit the arm-guard and was taken by Prior. Rahane walked out of the ground in disbelief and showed his partner that the ball had hit the arm-guard. There is nothing he could do as there is no DRS.

This decision would once again reignite the DRS debate and the social media is already abuzz with the topic. The BCCI is known to be staunchly against it. But, whenever there is a poor decision, this always comes up.

Meanwhile, India are in a huge spot of bother. They have just gone past the 100-run lead and need to build this to challenge England. Vijay is now batting with skipper Mahendra Singh Dhoni. Given that there are two more days to go, India have to build a good score to present a fight. The pitch has eased out now and batting is a lot simpler than what it was on Day One. 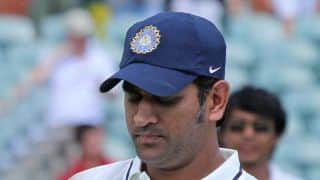