Rahane was on his way to his third Test fifty.

Ajinkya Rahane and Rohit Sharma looked solid in the second session of Day Three of the third Test between India and England at Southampton. Rahane was batting particularly well against England’s quick bowlers, as Rohit Sharma — playing his first Test of the series — batted patiently at the other end.

Earlier, Virat Kohli was dismissed by James Anderson caught by Alastair Cook in the slip cordon. Murali Vijay was bowled by Stuart Broad off an inside edge while trying to leave, and Cheteshwar Pujara was dismissed caught behind by Jos Buttler while trying to evade a short ball from Broad.

India resumed at 25 for one on Day Three. James Anderson kept asking questions of the batsmen, but Chris Woakes looked largely nonthreatening. The introduction of Broad proved incisive, as he came in hard and sharp, and eventually got rid of both overnight batsmen. 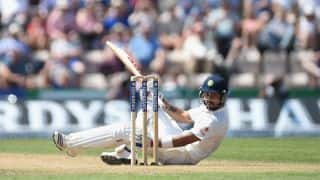 Virat Kohli dismissed by James Anderson on Day 3 of India vs England, 3rd Test at Southampton