Kapil Dev said Rahane always surprises you with his performances.

Ajinkya Rahane who had an excellent Test series against South Africa at home recently was now praised by former Indian cricketers VVS Laxman and Kapil Dev. Rahane’s twin tons in the fourth Test at Delhi in the recently concluded 4-match Test series against South Africa are still being discussed and appreciated by a lot of cricketing pundits. Laxman and Kapil Dev also labelled him as a “complete team man.” India thrashed the visitors by 3-0 with the second Test at Bangalore being washed-out by rain. It was one of the biggest achievements by the Indian team in the whites especially when it was Virat Kohli’s first assignment at home as India’s Test captain. READ: Ajinkya Rahane aims to be hailed as world’s best batsman

According to Times of India, Kapil Dev added, “When I first saw him, I never thought Ajinkya had so much ability He keeps improving. He always surprises you with his performance. That’s his best ability.”

Talking about Rahane’s centuries at Ferozshah Kotla last month, the former Indian skipper added, “Even after 20-30 years, people will still be talking about his two centuries against South Africa. The conditions were difficult to bat on. The real test of ability lies in scoring runs in different type of situations and conditions and that’s when a batsman becomes a complete cricketer. I think he is a complete cricketer.”

Meanwhile, Laxman suggested that Rahane has traits of being a complete player. He said, “The biggest challenge for him came after being left out of the ODI squad in the Bangladesh series. In Bangladesh, it was said he is not suited to bat in subcontinent conditions. I was really impressed with the way he came back. He is a complete player, not only from the skill point of view, but also from the mental aspect.”

Laxman went on to add, “He has a solid basic technique. He can be consistent in any conditions. He knows how to play the big shots. He is a very aggressive runner between the wickets. These three qualities make him a complete batsman.” READ: Ajinkya Rahane: T20 cricket comes to me naturally

Laxman who mentors IPL franchise Sunrisers Hyderabad also suggested that Rahane’s experience with Rajasthan Royals is one of the major reasons behind his current successful run. He said, “People mistake someone who is nice or naturally calm as not aggressive. If you are not tough, you can’t go out and perform in such tough situations. I had no doubt in his ability, especially in the longer format of the game. He had lots of big scores in first-class cricket even before making his international debut in Test match cricket. He was not suited to ODI format as much as in Tests.”

“I believe the stint with Rajasthan Royals has really helped him. He has understood what is required to be consistent. He has learnt to perform in T20 cricket without changing his game. He is almost like a Sachin Tendulkar or a Rahul Dravid or a Jacques Kallis, playing conventional cricket shots. He knows how to pace his innings, he knows about the risk-free options which give him rewards in terms of runs,” Laxman signed off. READ: Virat Kohli: Ajinkya Rahane has a perfect blend of intent and technique 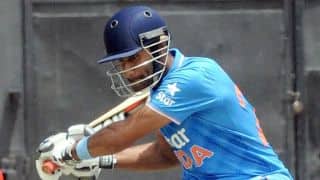